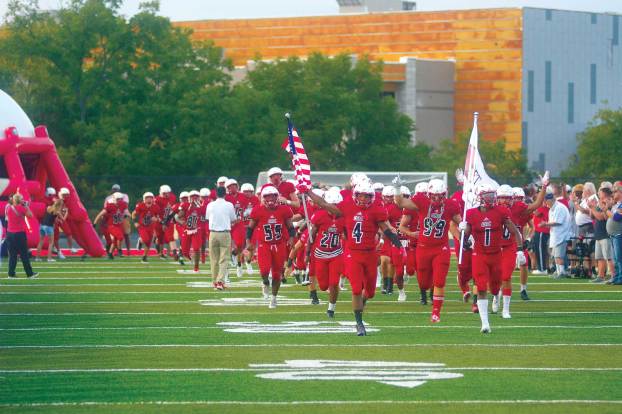 The Cardinals were led through the helmet for the stadium opener by flag-carriers Aquevion Lewis (4) and Azariah Israel (1). (Photo by Roman West)

For six long years, students and members of the community awaited a new athletic complex to go along with the new high school. On Sept. 6, the waiting finally paid off.

George Rogers Clark’s football team took to the gridiron for the first time at the new Cardinal Stadium, marking a new milestone in Clark County.

Along with this year’s team, others to take the field were the all past Cardinals with a special halftime ceremony for the 1991 state champion team, future Cardinals from the Campbell and the Civitan football league and a parade of members of the band, ROTC, choir, orchestra, dance team and cheerleaders led the community to the field.

The community was given free admission to support their Cards and they filled the stadium’s 3,500 home seats.

GRC got behind two touchdowns early but rattled off 28 unanswered points to put themselves in the driver’s seat for the stadium’s opener, largely thanks to one of the state’s top running backs Azariah Israel.

Israel finished the game with 157 yards and one touchdown on the ground to go along with a 57-yard touchdown catch, his only reception of the game.

“We’ve got people on this team who can strike,” head coach Oliver Lucas said. “Look at Az – I mean what can I say?”

The game got sloppy in the fourth quarter as Tates Creek cut it to a six-point game with six minutes to go.

Driving, the Commodores had a shot to take the lead but a pass was broken up in the end zone by GRC to force a turnover on downs to seemingly secure the win, but a fumble gave the ball right back to Tates Creek with two minutes to play.

But the stout Cardinals’ defense from the second quarter returned, forcing and recovering fumble of their own to lift the Cardinals to a win in the first game at their brand new facility.

“Our kids showed the character that I’ve talked about,” Lucas said after the game. “They’re resilient and they don’t quit. They kept going and they make it go our way.”

That resiliency has shown through the season as they’ve battled back from a 2-4 record to go undefeated in district play and earn the top seed in the district for the playoffs, clinching home-field advantage.

Civitan football was back in action with some special guests on Sunday. George Rogers Clark had several varsity football players... read more