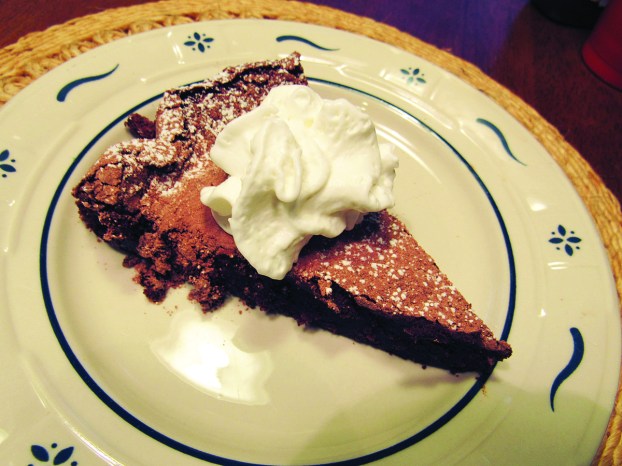 Nailed It or Failed It: Dark chocolate torte

Brad kept telling me he wanted something chocolatey and sweet.

After looking through the folder of recipes, I found one lone chocolate recipe; I’d torn it from an old issue of Southern Living Magazine. It seemed pretty simple to make and I had all of the ingredients, except Dutch process chocolate.

Preheat oven to 300 degrees. Coat bottom and sides of an 8-inch springform pan with cooking spray.

Microwave chocolate morsels in a medium (50% power) for 1 minutes or until melted and smooth, stirring at 30 second intervals

Bake at 300 degrees for 45 minutes or until set. (A wooden pick inserted in center will come out with just a few crumbs on it.) Remove torte from oven; immediately run tip of a small knife around edge of torte. Let cool on wire rack 30 minutes. (Torte will rise to top of pan while baking but will sink while it cools.) Remove sides of springform pan.

Spoon whipped topping into a zip-top plastic freezer bag (do not seal). Snip 1 corner of bag to make a small hole. Pipe dollops of whipped topping around base of torte. Sprinkle torte with powdered sugar and cocoa.

While at the grocery, Brad and I found the Dutch process cocoa next to the regular cocoa. After reading the ingredients, I decided to use what I had at home.

Dutch process cocoa is less bitter than regular cocoa, and after some research after the fact, I discovered you can substitute regular cocoa for Dutch process, but not the other way around (it’s a chemical process in the baking that won’t allow the end product to turn out right).

I don’t have an 8-inch springform pan so I used a 9-inch one instead. I sprayed the pan with cooking spray and set it aside.

Next, I poured some dark chocolate chips in a bowl. I’ve never used half power on my microwave, but after pushing a few buttons, I was ready to melt the chocolate.

It took the whole minute to get the chocolate soft, though I did stir after 30 seconds. Be careful when melting chocolate in the microwave as it can burn and or seize up quickly.

It was time to blend the butter and sugar. I used my hand-held mixer for this part. After mixing for two minutes, I added the other ingredients and continued to mix following the recipe to a tee.

After adding the milk, the mixture did indeed look curdled and I was glad the recipe said not to panic.

After adding the melted chocolate and mixing a little more, the batter was smooth again and in went the cocoa and the flour.

Once all the ingredients were incorporated, it was time to use my stand mixer to beat the egg whites and cream of tarter. Within just a few seconds the egg whites were foamy and I gradually added the remaining sugar. I turned the mixer up and let it do its job, and in no time, I had stiff egg whites.

I don’t have a lot of patience and it takes patience to fold egg whites into anything. It was taking so long that I had to rest because my arm was getting tired. Finally, I just stirred quickly hoping I wasn’t undoing all that work the stand mixer did to get the air into the egg whites.

I spooned the batter into the prepared springform pan and placed it in the preheated oven.

The torte baked for 40 minutes when I poked a toothpick into the center to see if it was done. It wasn’t done so I let it continue to bake five more minutes. I removed the pan from the oven and ran a knife around the edge to loosen the torte from the pan.

I measured out the cocoa and powdered sugar, combined the two and started sprinkling it over the torte. It seemed like way too much cocoa so I stopped and sprinkled some extra powdered sugar on top to make it look pretty.

After supper that night I asked Brad if he still wanted something chocolate and of course he said yes; dark chocolate is his favorite.

I cut him a slice of torte, squirted on some Reddi Whip and he took a bite.

To my surprise he wasn’t overly impressed with this dessert. His first reaction was “it’s really chocolatey” next he said “it doesn’t have much sugar in it;” this from the man who doesn’t like sweets.

As he kept eating, I asked if it was something he’d want again and he said “Not really, I’d rather have a chocolate chip pie or the chocolate sheet cake you make.”

My bubble wasn’t burst, but I was disappointed this wasn’t a “Oh my, this the bomb” dessert.

Brad took a slice of the torte to Sandra; his physical therapist and she had a different reaction; she really liked it. So, I’m torn about whether this is a nailed it or failed it recipe.

I guess I’ll have to say it turned out fine, but it’s not something I’ll add to my self-made cookbook.

Next time Brad hints that he want’s something chocolate, I’ll just make him some chocolate chip cookies.

Nailed It or Failed It: Spaghetti squash with pecans and dates

I found this side dish recipe while reading my November 2019 issue of Food Network Magazine. There were several recipes... read more