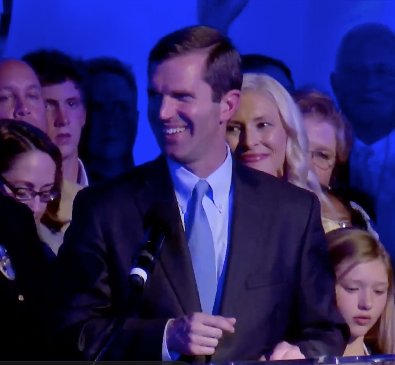 Despite the direction of most other races Tuesday night, Democrat Andy Beshear ousted Republican incumbent Matt Bevin and was elected governor.

According to preliminary results from the State Board of Elections, Beshear beat Bevin by less than 10,000 votes.

Although Beshear issued his victory speech to a packed crowd shortly after 10 p.m. Tuesday, Bevin had yet to concede.

In his speech, Beshear touted his dedication to Kentucky’s teachers and public educators, vowing to bring more transparency and civility to the office.

“Tonight, I want to say ‘thank you’ to our union families that helped make this election happen,” Beshear said after thanking his family, including his father, former governor Steve Beshear. “I want to thank the FOP, the Fraternal Order of Police. I want to thank our educators.

“To our educators: your courage to stand up … against all the bullying and name calling galvanized our entire state. … This is your victory.”

Beshear said the doors to the state capital will always remain open and said he wanted to restore the dignity and respect owed to the state’s public servants.

“We will honor our commitments to our public servants. We will make sure that promises made are promises kept,” he said, referring to Kentucky’s state employees’ and teachers’ pensions. “And we will work day and night to do as much good as we can, however we can.”

Beshear said now that the election is over, it’s time for Kentuckians to move forward as a team.

“Team Kentucky is a team whose mission is rooted in our shared values of faith, hard work and a belief in a bigger, brighter tomorrow,” he said. “These Kentucky values transcend any and all party lines.”

With that in mind, Beshear said he is committed to be a governor for everyone — no matter where they live or what their party affiliation is.

“If I did not earn your vote today, rest assured I will work hard to earn your trust,” Beshear said. “And even more importantly, I will always strive to do the right thing, because I didn’t run for this office just to be governor. I ran for this office to govern well.

“As your next governor, I will listen more than I talk. I will work with anyone who has a good idea that we can deliver for Kentuckians.”

Beshear also touched on the “partisan bickering” that took place throughout the last few years and this campaign.

“With all the partisan bickering and nastiness that we’re seeing in politics, we have an opportunity to do better right here in Kentucky,” he said.

He said the state faces big challenges and talked about the “kitchen table issues” he used as a platform for his campaign.

“I will govern focused on those same challenges of good jobs, healthcare for every Kentuckian, protecting and funding our pensions and always supporting public education,” he said. “I believe we have a brighter tomorrow. To make Kentucky the agri-tech leader of this country, we’re going to build our advanced manufacturing sector and invest in workforce training. That’s how we’re going to create good jobs all over Kentucky in every single community.”

To roaring applause, he said in his first week of office he plans to rescind the Medicaid waiver established by Bevin. He plans to give the state a “brand new board of education” and restore the voting rights of more than 140,000 citizens, among other things.

He said under this administration, “a pension is a promise.”

“There will be no more going after the pensions of our teachers, social workers and social responders,” he said. “They have earned that retirement.

“And public education will be the central priority of my administration. We are going to invest in our public schools because we believe in the next generation of Kentuckians.”

And while the election is over, Beshear said the state is on the verge of a brand new chapter.

“And that is a chapter where every family, every individual and every single Kentuckian truly counts,” he said.

In August, eight members of Studio One’s Elite Power went to New York City to film a segment for a... read more