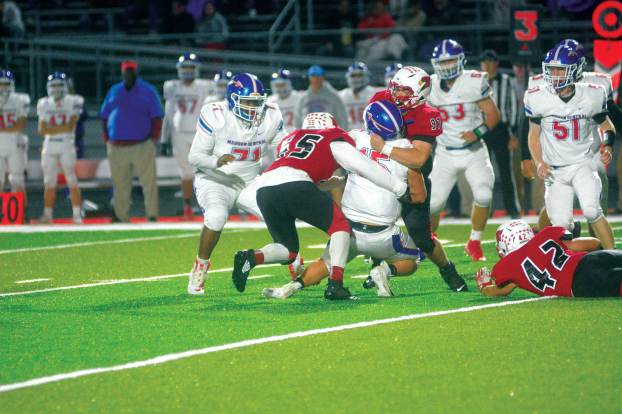 George Rogers Clark’s football team earned the top seed in 6A District 8 during the regular season, allowing them to host the first two rounds of the playoffs.

Their first round matchup against the Madison Central Indians will be the 57th meeting between the two schools on the gridiron, with Madison Central leading the all-time series 30-25-1.

The two teams met in the regular season at Cardinal Stadium with the Cardinals winning 42-34.

“Don’t let their record fool you,” Lucas said. “They can absolutely play. It was a shootout last time.”

GRC had one of their best offensive performances of the season in the first matchup, putting up 417 yards of total offense.

The passing game was firing on all cylinders as Jordan Manley set his season highs in yards and touchdowns, throwing for 234 yards and four touchdowns.

Since falling to the Cards, Madison Central’s offense has been stagnant. In their two games, they scored a combined 13 points and picked up 360 yards.

Madison Central was one of only three opponents this season to give up more passing yards than rushing yards to the Cardinals, largely part to GRC running back Azariah Israel.

Israel is fourth in the state in yards (1,950) and touchdowns (25). Israel is the engine that keeps the Cardinals’ offense moving, but Madison Central has two of the best defensive linemen in 6A, Edgren Sweat and Kyran Jackson. The two are both in the top 20 in the class in sacks, picking up a combined 10.5.

GRC has two excellent pass-rushers of their own in Jaylynn Johnson and Trace Mitchell, who have combined for 11 sacks on the year. In the first matchup of the season, the Cardinals sacked Madison Central’s Canon Scenters four times.

The Cardinals are looking for their first playoff win since 2009, while Madison Central made the state semifinals last season.

Basketball season in the bluegrass began with Kentucky taking down the nation’s top-ranked team on Tuesday night, and that means... read more