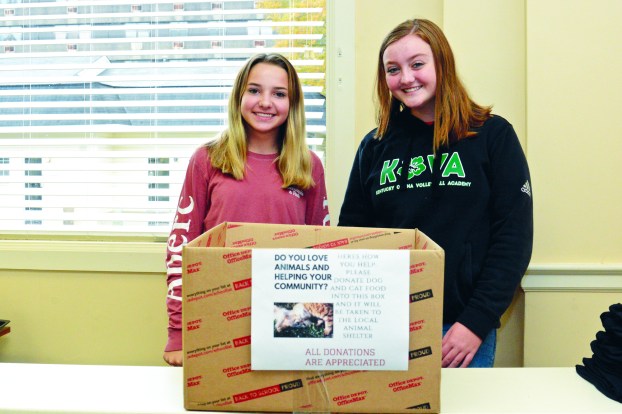 Amazing Shake started at Campbell last year with seventh-graders in advanced classes completing a community service project during which they collected hygiene products for veterans and put together a project for the school’s annual Veteran’s Day program.

About 60 students later went on to compete in an in-house Gauntlet competition. During the Gauntlet, students went through various stations such as dialing numbers on a rotary phone, handling disgruntled customers, making a pitch for Cactus Pepper Hot Sauce and more to test the soft skills learned throughout the year. Winners from that competition moved on to other rounds, such as a speech competition and an interview with Ale-8-One.

Leah Adams, a seventh-grade social studies teacher at RDC, previously told The Sun she and other staff learned about Amazing Shake while visiting Mason County schools.

The ultimate goal is for every student in Campbell to participate in the program in 2021.

Boxes are set up at the Winchester-Clark County Chamber of Commerce, Community Trust Bank downtown, Traditional Bank on Bypass Road and City Hall.

“We check them every few days,” O’Brien said.

Anderson and O’Brien chose the animal shelter as their cause because of their shared love for animals.

“We know they have a lot of animals, and they sometimes need help getting all of the food and supplies they need to take care of them,” O’Brien said. “… We thought it would be a good thing to do.”

Anderson and O’Brien have worked hard on the project so far, making flyers, making cold calls to place boxes and marketing the project so people will donate.

“We’ve worked on it every day for a couple of hours each day,” O’Brien said.

O’Brien said the boxes would be up for a couple more weeks, so she invites people to donate as soon as possible.

Anderson said she’s struggled with worrying if people are going to donate.

“It’s been really difficult for me … thinking that people aren’t actually going to donate, and this might be a waste of our time,” Anderson said. “But if we’re going to help at least someone, then it’s definitely worth our time.”

The students will deliver the donations to the animal shelter at the end of their collection period. O’Brien said she would like to thank their parents for helping them with the project.

“We wouldn’t have been able to do it without them,” Anderson added.

Anderson and O’Brien said they would love to do more community service projects in the future. They said they learned a lot from this project. Anderson even encouraged others to go out and volunteer in the community.