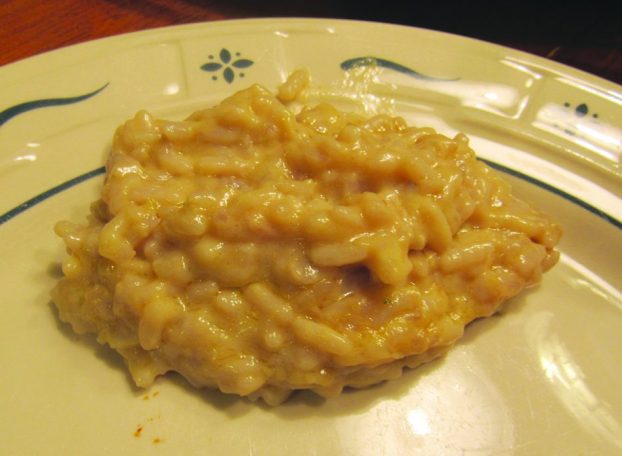 Nailed It or Failed It: You can’t judge a recipe by its picture

As usual, I was looking for something different to make and started going through one of the folders of recipes I’ve clipped and saved over the years.

I passed this recipe up several times but decided it was the perfect time to give it a try.

We were going to have chicken for supper and I thought this would be a great side dish.

I’d torn the recipe from the July/August 2008 issue of “Cooking with Paula Deen” and just about all of her recipes appeal to me.

In a large skillet, melt butter over medium heat.

Add onion and celery; cook for six to eight minutes, or until tender.

Stir in soup, broth and liquid smoke; increase heat to medium-high and bring to a boil. Boil for one minute.

Remove from heat; stir in rice and garlic salt.

I had no idea how long this recipe would take, so I started preparing it a couple of hours before we were going to eat.

I was not only going to fix this new recipe, but I was also going to prepare a couple of others too (I’ll tell you about those dishes in the coming weeks).

This recipe calls for cooked rice. Since it takes rice about 25 minutes to cook, I got it going first.

Next, I chopped the onion and celery.

Once the butter was melted, I added both vegetables and let them cook until they were tender. The smell was wonderful.

I added both cans of soup to the skillet along with the broth and liquid smoke.

I stirred until everything was well combined. Then I turned up the heat a bit and brought the mixture to a slow boil.

By this time, the rice was done so I removed it from the stove. I thought one cup of uncooked rice equaled two cups cooked, but I measured to make sure. Good thing I did, because there were more than two cups of cooked rice in the pan.

I poured in the rice along with the garlic salt, stirred to combine all the ingredients and then spooned the mixture into a greased casserole dish.

I covered the dish and let it sit while I prepared the chicken for our meal.

About the time the chicken was going into the oven, I placed this rice dish in my second oven.

When I placed the rice on the table I said, “This doesn’t look very appetizing.

The picture that accompanied the recipe I’d torn from the magazine showed the dish as being a light-yellow color. Mine turned out kind of gray looking.

We both decided not to let the looks of it keep us from trying it.

Brad blessed the meal and we both scooped out a helping of the rice. I took a little taste, then a bigger taste.

In spite of the way it looked, it tasted pretty good. Brad thought it was really good. We both scooped out a little more and added it to our plates.

I’m not sure why the title of the recipe is barbecued rice since there isn’t any barbecue sauce in it. I did taste the liquid smoke, though that flavor was pretty mild.

Next time I’ll add a little more just to see how that works.

I nailed this recipe and it will be added to my self-made cookbook.

This is not a dish I’d take to a pot luck, only because we typically eat with our eyes first and I think most people would look at this on a table and say, “I’ll pass.”

After measuring out two cups, there was some cooked rice left in the original pan, I added it to the dish before putting it in the refrigerator.

This recipe made way more than the two of us could eat so we heated it back up and had it with a couple of meals that week.

It heated up well and was so moist (even with the extra rice added) it didn’t dry out. Really it seemed to get better with each re-heating.

So much for judging a book by his cover, or picture. This dish is a winner.

Nailed It or Failed It: Dark chocolate torte

Brad kept telling me he wanted something chocolatey and sweet. After looking through the folder of recipes, I found one... read more