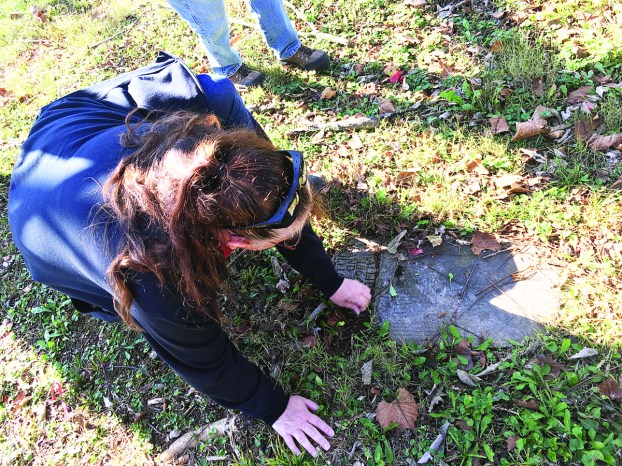 Janice Martin clears away leaves and sticks from atop a headstone at Reeves Memorial Cemetery as she talks about the history of the long-forgotten cemetery in Clark County. (Photo by Whitney Leggett)

It was the summer of 2016 when Janice Martin was among a group of people helping clean veterans’ grave markers at a local cemetery as part of Mission Restore Bronze.

A neighbor nearby asked to show Martin another nearby cemetery that needed some attention.

“I got there across the street and I just started walking,” Martin said. “It was all overgrown in the woods.”

Martin walked from one end of the overgrown brush to the other and found herself becoming emotional.

“I started walking and the more I walked, the more stones I found,” she said. “And when I got to the end, I was in tears.”

The long forgotten cemetery, Reeves Memorial Cemetery, was dedicated “to the colored people of this community” in 1939 and is home to more than 30 veterans’ graves along with dozens of others from Clark County.

The cemetery is located on the east side of Old Muddy Creek Road across from Daniel Groves Cemetery, another African-American cemetery.

According to records from the Clark County Public Library, burial records list 288 names through 1956 (although several headstones date past 1956) at Reeves Memorial, but the cemetery is on privately-owned land and had not seen upkeep for many years.

“I decided this was going to be my project,” Martin said.

It was more than three years ago that Martin discovered the cemetery. Today, it looks like a different place.

Janice and her husband, Randy, are members of the VFW Post 2728 and Randy is a Mason with Right Angle Lodge 233. The two groups have come together over the last few years to clear the cemetery, clean the headstones, restore what they can and even log as much of the history of the cemetery as possible.

The brush has been cleared over a large portion of the land that is the cemetery and many families have been able to visit their loved ones’ resting places for the first time in many years.

The groups working at the cemetery spend several hours each weekend in the warmer months maintaining what has been done there — keeping brush cut back and mowing.

“There is still much work to be done, though,” Martin said.

She said there are possibly more stones and unmarked graves in adjacent overgrown areas that need to be cleared.

The main issue is lack of resources and manpower.

Because the property is privately owned the group of volunteers is limited on where they can get public funding for upkeep and the group is primarily older individuals who are limited physically.

“We look at each of these veterans buried here as our brother,” Martin said. “They need to be taken care of.”

The Masons are also proud to have taken the task of maintaining the cemetery.

“There’s a Grand Masters Excellence Award that Masonic Lodges can earn,” Andrew Gaskell, master of Right Angle Lodge, said. “In order to qualify for that, a lodge has to adopt and maintain a cemetery. But really, it’s one way for us to give back, especially to a group of people who gave so much for our country.”

Anyone interested in helping with work at the cemetery or with information about those who are buried there can reach Martin at 859-595-1657 and leave a message.