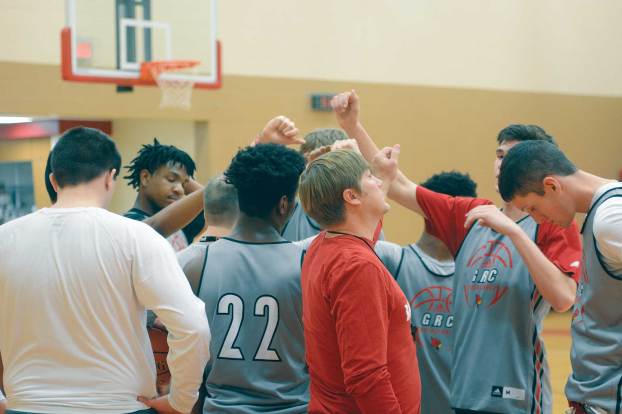 The team huddles around head coach Josh Cook during a timeout during an intra-squad scrimmage to close out practice on Tuesday. (Photo by Roman West)

GRC working on a new, fast-paced style of basketball

George Rogers Clark’s boy basketball team is coming off back-to-back district championships and an appearance in the region championship game, their deepest postseason run since 2012.

After losing eight seniors off last year’s team, fourth-year coach Josh Cook is transforming the Cardinals’ style of play with hopes it will lead to a special season.

“We’re trying to pick up our pace and our style. We want to be a 32-minute basketball team that can get after you and guard you full-court while we continue to be aggressive on the offensive end using the fast break and quick-hitters,” Cook said. “There will be days that it doesn’t look great, but we’re going to trust the process and understand that this style of play is going to be something that’s exciting and something that will really help our program fill in some of the spots we lost.”

Cook will have some new faces on the court this year but is excited for what they can be.

“We have some really good young talent in this program, so if we can get our minds right then we can do some really special things the next couple years,” Cook said. “It’s just getting a championship mentality, a team-first mentality to get them to play this way, and it’s going to take some time and some teaching.”

That team-first mindset is something Cook preached on, stressing how important it was to the success of the team. With the season less than three weeks away, working on that mentality is one of the biggest focuses in practice.

“We’re trying to find a little bit of a rhythm and we’re really going slow with the stuff we’re trying to put in. We don’t want it to be too much at once,” Cook said. “We’re really trying to get their attitude and mindset right to play this style because it really has to be a team-first mentality.”

That team-first mentality is something this year’s seniors – the first group that has spent all four seasons of GRC basketball with Cook – are helping implement to the younger players.

“They bring consistency and they bring sacrifice. They understand that we want to go a step further, they’ve been here,” Cook said. “For them to be here, with everything we’ve got coming in new here, they’re a staple. They’re the guys who put that team-first mentality into our program.”

Cook is looking for the community to come out to support the team but wants them to be aware of what it may be in the beginning.

The Cardinals’ first scrimmage is against Great Crossing on Nov. 23 and they open up the regular season when they host a boys and girls doubleheader against Bath County on Dec. 3.