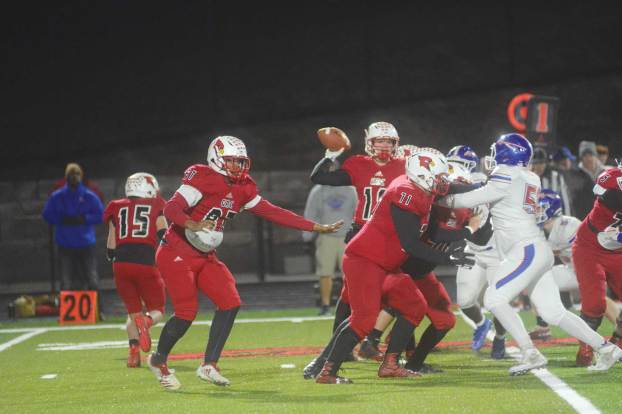 The Cardinals’ offensive line has been stout all season but will have to hold up once again for GRC to have a shot at the postseason district championship. (Photo by Roman West)

George Rogers Clark head coach Oliver Lucas has the Cardinals on a five-game winning streak after downing Madison Central in the first round of the playoffs, his longest streak in his tenure at GRC and the longest for the program since 2009.

The win against Madison Central was also the first postseason victory for the program since 2009, but the Cardinals don’t want to stop there. The win against Oldham County would give GRC their first birth in the third round since 2006.

The Cardinals were able to escape after stopping the Colonels on a last-second two-point conversion attempt that would’ve sent the game into overtime.

One key for the Cardinals in this game will be ball security. After losing three fumbles in the first game, possession could be the difference in a win or loss.

The Cardinals trailed in the first game at halftime, but running back Azariah Israel found the end zone three times in the second half to lift the Clark County to the win. After allowing just under 300 yards to GRC on the ground, the Colonels’ defense has stopped the run in their following two games, giving up just 130 yards.

Oldham County quarterback Sam Young has continued an excellent season in the team’s two games since playing GRC, going 23-for-32 for 309 yards with four touchdowns and no interceptions. However, the team’s top receiver Parker Caudill has been quiet in the two games, picking up only two catches for 25 yards. Caudill was able to find the end zone twice on four catches in the first game against the Cardinals.

The game could be decided in the trenches, as GRC has two of 6A’s best pass rushers in Jaylynn Johnson and Trace Mitchell. The two have combined for 11 sacks, each in the top 20 in 6A. According to KHSAA, the Colonels haven’t given up a sack in the two games since losing to GRC, but the Cardinals did pick up seven sacks in the first matchup.

Clark County’s offensive line has protected quarterback Jordan Manley as well since the first matchup, when they didn’t allow a sack, giving up only one sack in two games. The Cardinals were missing senior offensive lineman Blake Watkins in the game they gave up the sack.

In a game that could come down to who has the ball last, the Cardinals have an advantage at kicker. While both kickers have only attempted three field goals all season, Tye Boyken has been nearly automatic on PATs, converting 42 of 46, while Oldham’s Khaled Al Asad has gone 33 of 38 on the season.

GRC working on a new, fast-paced style of basketball