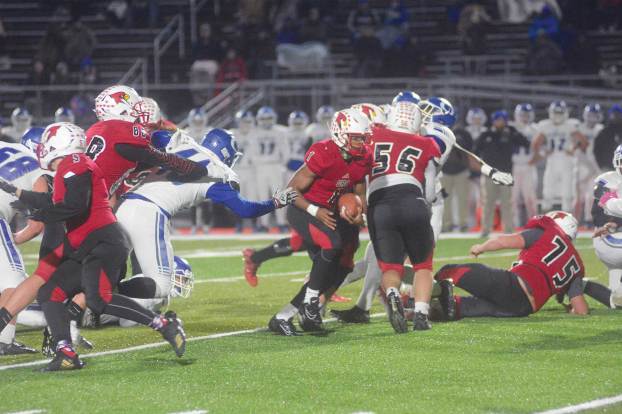 The Cardinals’ offensive line creates a hole for Azariah Israel (1) to break through. (Photo by Roman West)

George Rogers Clark hosted Oldham County Friday night with the 6A District 8 championship on the line. The two teams met in Oldham County during the regular season for the top seed in the district for the playoffs, which GRC won 28-26.

The Cardinals looked to move on to the third round of the playoffs for the first time since 2006 with the win, but the Colonels had other plans.

The Cardinals were moving the ball well on the game’s opening possession, taking it down to the Oldham County 1-yard line before turning it over on downs. They then fell behind 7-0 after a 56-yard touchdown pass late in the first quarter but responded with a 58-yard touchdown of their own courtesy of Azariah Israel just two minutes later.

Clark County had an opportunity to take the lead in the second quarter with a 38-yard field goal attempt, but it came up just short and the Colonels took over at their own 20.

Oldham’s first play after getting the ball back was an 80-yard touchdown pass that gave them a 7-14 lead. Neither team put any more points on the board in the half, and with Oldham receiving the second-half kickoff, they had the chance to open up a big lead on GRC.

Coming out of the break, GRC forced the Colonels into a fourth down at the Cardinals’ 32-yard line, but once again a long touchdown pass burned the Cardinals and Oldham County took a 21-7 lead.

“Our secondary has been our Achilles heel all season long,” GRC head coach Oliver Lucas said. “They’re just inexperienced. They’re young so they’ll learn, but we couldn’t get off the field tonight.”

The Colonels were able to burn that young Cardinals’ secondary again with a 61-yard touchdown pass as the third quarter came to a close, giving the Cardinals a three-score deficit entering the fourth quarter.

But the Cards kept fighting and scored quickly to open up the quarter. Quarterback Jordan Manley scrambled for a 13-yard touchdown run to give GRC life.

The Cardinals had Oldham County in a third-and-long and nearly picked up what could’ve been a game-changing sack, but the Colonels’ quarterback found an open receiver before he went down who took it to the end zone, once again making it a three-possession game with nine minutes to play.

Another quick Cardinals’ touchdown, a 33-yard Manley-to-Dylan Gibson pass, kept the Cardinals alive with eight minutes to play, but Oldham County was able to burn nearly the entire time off the clock on their next possession before turning it over on downs at the GRC 6-yard line with 1:30 left in the game.

GRC drove the ball downfield but wasn’t able to get into the end zone, resulting in a 35-21 loss to end the season.

Lucas said that focus was the difference in the postseason loss and the regular season win.

“We weren’t focused, and it’s hard to beat a team twice,” Lucas said. “We made more mistakes than them because we weren’t as focused.”

GRC finished the season 7-4, matching last season’s record as the best since 2009. The Cardinals also won their first playoff game since that 2009 season.

GRC will graduate 15 seniors off this team, who Lucas will miss.