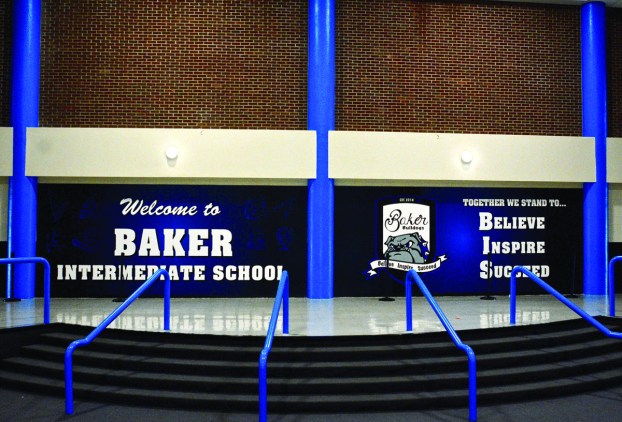 Baker Intermediate School replaced a trophy case with a new welcoming wall in its atrium. The effort was part of Baker's response to student feedback in the 2019 On the Table report. (Photo by Lashana Harney)

Gone is the gloom and doom of the old Baker bathrooms.

The effort to bring cheer and inspiration into Baker’s building came as a result of the On the Table reports, which The Clark County Community Foundation released to the public in September. Principal Josh Mounts said some Baker students recommended in the report improving and adding positive messages to the building.

Baker’s atrium is now brighter and more inviting. Over the summer, workers painted it, replaced the trophy case and added a welcoming message.

This project was part of On the Table, a national civic engagement initiative supported by the John S. and James L. Knight Foundation; The Chicago Community Trust initially developed it.

This year’s topic focused on inclusivity and belonging with conversation prompts centered on creating a welcoming community for all residents and visitors.

“Students met with their related arts classes, and they were surveyed,” Mounts said. “Some of the findings that we found were students felt like our school wasn’t very welcoming.”

Mounts said Baker first received the On the Table results in the spring before the report went public.

Baker staff immediately went to work to see how the school could address students’ concerns.

“I think a lot of times, as adults, we hear our voices and we hear our opinions, we skim over and sometimes skirt the viewpoints of kids,” Mounts said. “But kids are really in tune with things. So we took this information, and we devised the game plan and took their suggestions.”

Mounts said some of the things students cited as concerns were things Baker had already started to address behind the scenes. Cindy Whiteside, the sixth-grade guidance counselor at Baker, said that was good because it showed the staff was on the right track.

“It’s almost like everything fell into place and aligned,” she said.

According to the On the Table reports, Baker students requested additional in-class lessons explicitly targeted on how to stop a bully or how to safely intervene if someone is a victim of bullying.

Students also requested adding “buddy benches” to their playgrounds. A “buddy bench” is an identified bench where students sit when they are feeling lonely or need a “buddy” with whom to play. Other students then know to include that student in their activities.

“A few teachers said they did see some cool things going on out there as far as inviting kids to get up and join in with other kids,” Mounts said.

Adding sign language classes and other opportunities to discuss inclusion for students with special needs was another suggested solution from Baker participants.

“One student or a couple of students felt like students with severe special needs are being bullied,” Mounts said.

Mounts said inclusion for special needs students was surprising to him because he felt like Baker had been doing an excellent job in that regard.

“It always seems like inclusion was a priority for us,” Mounts said. “So to hear kids say that that still was not where we needed it to be, or wanted it to be, was surprising to me.”

Whiteside said Baker Buddies is a school organization with a mission to create a safe, welcoming, inclusive environment for all students.

The club focuses on providing education for understanding and accepting differences between individuals, giving back to the school and creating positive relationships with peers.

Club meetings consist of sharing disability awareness information, getting to know other peers who may be different from them, restoring the school garden later in the spring and activities to help spread awareness of differences between peers.

Baker also offers an apprenticeship program. Students fill out applications to be an apprentice, and if accepted, students can work in an area of their choosing. Some students work in the library, with the custodian, with a teacher or in the special education classroom.

Mounts said other students cited concerns over not having enough clubs or activities for students. Besides Baker Buddies, Baker also added a mindfulness club and student government this year.

Mounts said while these new initiatives are unfolding, it’s essential to connect the dots for not only the students but the staff as well.

“Why are we doing these things? You can go into the restroom and see the positive messages, but we want people to know ‘hey, we did listen to what you had to say,’” Mounts said. “You’ve got buddy benches. Now, this is why we have buddy benches because students last year suggested this. They suggested our building be painted. They suggested one of the areas in our in the report defining was the restrooms. They were dark. They were gloomy.

“The reason why we have new stalls, the quotes, positive words of encouragement is that we’ve listened to our kids.”

Whiteside said there is more to come as there are always ways the school can improve.

“I think Baker, specifically, is really good at thinking outside the box and brainstorming and always asking, what can we do better?” she said. “… We’re already doing a lot, but what else can we do?”

Mounts said one way the community can get involved in Baker’s road to continuous improvement is to sign up as a mentor or volunteer.

Baker plans to participate in the next round of On the Table. Mounts said he also intends to keep his ear to the ground. He is always on the lookout for student and staff feedback.

Whiteside said if students feel heard, then they feel more of an ownership of their building.

“They take more pride in their environment, and I think they’re just going to try harder and be more motivated,” Whiteside said. “… It’s hard to feel involved in something if you don’t feel heard.”

‘James and the Giant Peach Jr.’ continues this weekend at Leeds

“James and the Giant Peach Jr.” performances continue this weekend at the Leeds Center for the Arts. Performances are at... read more