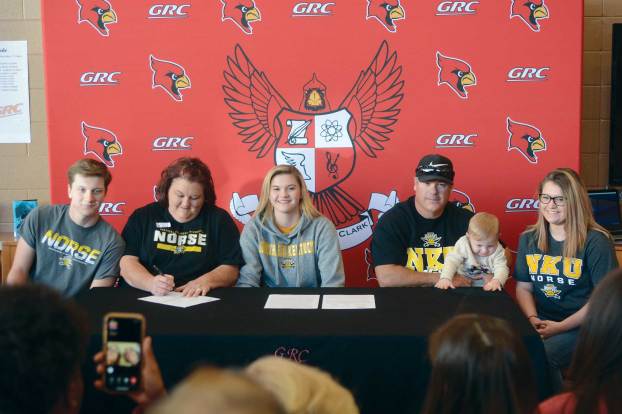 Kennedy Igo (center) after signing her letter of intent to play at Northern Kentucky University, surrounded by her family. (Photo by Roman West)

Kennedy Igo, a senior guard for the George Rogers Clark girls basketball team, signed her letter of intent to continue her education and basketball career at Northern Kentucky University of Friday afternoon.

Igo averaged 14.1 points per game as a junior on 45.6% shooting from the field. She also led the team in 3-point percentage, finishing the season at a 45.4% clip.

Northern Kentucky will be gaining one of the 10th Region’s top players, and she’s just as excited to be a Norse as they are to have her.

“Northern Kentucky’s coach Camryn Whitaker has been recruiting me since I was in with sixth grade and she’s basically family. I look at her as a big sister so I know her, know the team and Northern Kentucky was the right fit for me,” Igo said. “I think everyone on the team is close-knit and they all have each other’s back, the coach has their back, it’s just a team effort up there.”

While she’s excited to continue her basketball career at the next level, Igo knows there is still some unfinished business in Winchester.

“As a team, I want to win another region championship and make a run in the state tournament,” Igo said. “Personally, I want to get to 2,500 points this season.”

One person who is as excited and proud as anybody is her head coach, Robbie Graham.

“There are no words to describe how proud I am of her,” Graham said. “I tell everyone I love the kids like they’re mine so it feels like it’s one of [my] own kids getting the opportunity to get a free education and further their basketball career.”

But Graham isn’t ready to hand her over to Northern Kentucky just yet as the Lady Cards still have her for one more season.

“We want to get the one seed in the regular season, win the district and win the region to get a chance to go to state and give ourselves a chance an opportunity to win some games there. We’ve been able to do that for her three years and our goals are the same this year, so she’s going to be leading the charge for that just as she has the last few years,” Graham said. “Even as a freshman, she was different. Her toughness, her love to play, her drive – you just don’t find that in a lot of kids. Her drive’s to not just participate and be good, she wants to be great. She’s pushed her teammates to be that as well and she’s a leader on and off the court.”

Igo and the Lady Cardinals host their first exhibitions of the season as they take on Elizabethtown, Boyd County and Butler at noon today in GRC’s auxiliary gym.