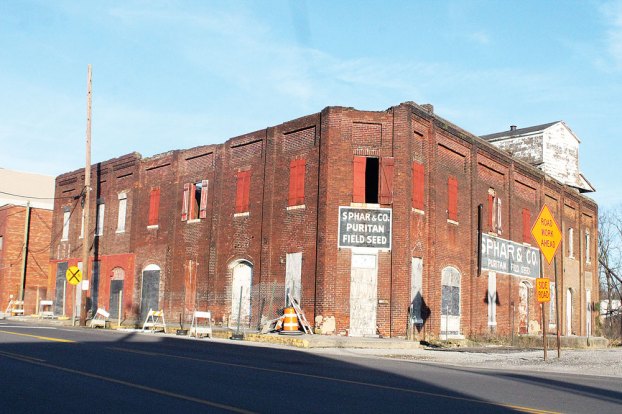 City officials hope to have bids in hand within the next month to tear down the Sphar building.

The City of Winchester has been working for several years to save and re-purpose the 138-year-old former seed warehouse on North Main Street.

When the project routinely was bid well beyond available funds, the city commissioners voted in October to demolish the building and fill the site to it will be level.

Winchester City Manager Matt Belcher said city staff is working on the bid specifications and hopes to advertise the project later this month.

Ideally, the commissioners would have bids to consider for the Dec. 17 meeting.

The silos would not be included in the demo project, he said. The bid specifications would call for the building itself to be demolished and the lot filled to grade.

While the city obtained grants to cover part of the restoration, the demolition costs would come from the city’s general fund.

Belcher said he would like to use the Greater Clark Foundation’s pledged $350,000 to restore the site to a usable state. Those discussions are ongoing, he said.

The original plan was to stabilize the crumbling building and use it for a welcome center, office space and other uses. Those bids came in well above the available funds at the time of nearly $2 million.

The project was rebid earlier this year to demolish most of the building while retaining space for offices. When those bids came in about $1 million above funding, the commissioners voted to end the project.

People have one more week to register for Operation Happiness. For decades, the annual event provides thousands of Clark County... read more