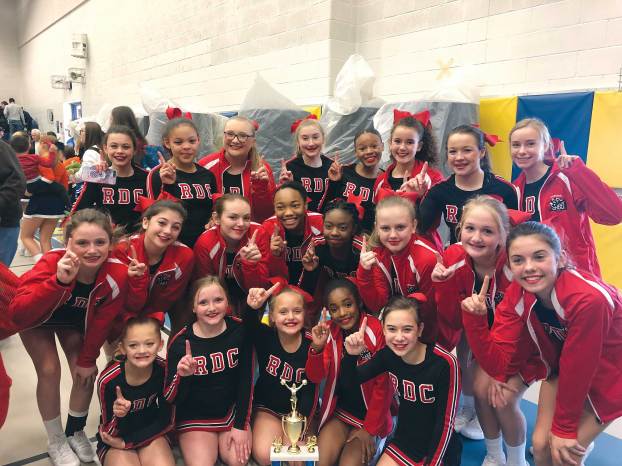 The Cardinals have gone through lots of preparation throughout the long season, but have also had several setbacks that Edelen-Howard believes had made her team come together as a family.

“We actually started in July,” Edelen-Howard said. “We have a three-day-long camp where we have a choreographer come in and they choreographed our entire routine and we’ve worked on it two to three times a week since then.”

But even four months of preparation don’t stop injuries from happening, something that the Lady Cardinals have had to deal with recently, and right before the region competition.

“We had a lot of trials last week, we had two people get hurt last minute. That’s one of the biggest things with cheerleading is having to make those last-minute adjustments,” Edelen-Howard said. “But that’s been our biggest strength, everybody working together to make those adjustments and make the modifications when it’s time to crunch down on the routine and get it done before region. We had to change things around the night before but the girls are really good about getting all that together, staying focused and getting motivated.”

The win at the region competition gives the team an opportunity to compete at state, but it won’t be as easy for the Cardinals this time.

“For region you want your routine to be a perfect hit, so we did have to modify some things to make it not as advanced just so that it would hit, and it worked. Everything hit and our routine was perfect,” Edelen-Howard said. “When we go to state, we want to progress and make it a little more advanced. With cheerleading, perfection in your routine but they also look at how difficult it is, so we’ve got to get that even balance of doing a really hard stunt or tumbling, but we also have to hit it.”

Edelen-Howard definitely believes in her team’s ability to put together a winning routine for the state competition by how much they’ve grown this season.

“They’ve grown together as a family. I have a huge mix of fifth through eighth graders, which is a huge gap in general, having 10-year-olds on the team and having 14-year-olds, and not all of them have cheered before,” Edelen-Howard said. “At the beginning of the year when you’re trying to teach those fundamental skills, some of them that don’t really know what they’re doing and some who have done it before, so you have to make a balance to make it interesting and make them love what they’re doing. As the season has progressed, they’ve all started to mesh together as a team and started working together a lot better.”

Not only is their coach proud about how they’ve grown as a family this season, but she’s also proud of their spirit.

“They love games, they love going out and performing in front of the crowd and entertaining everyone there,” Edelen-Howard said. “That was my biggest worry because of having that big age gap, I was nervous the older girls might have more spirit or the younger girls might be more motivated, but they’ve really balanced each other out and they just love being out there and doing what they do, which is the most important part about cheerleading in general.”

The Lady Cardinals will compete for a state championship on Dec. 21 at the Kentucky Horse Park in Lexington, but Edelen-Howard says the community can help support the girls before then too.

“This year we’re doing something new called in-game competition. They bring in judges to games but they don’t tell us which game they’re coming to and they judge us on how our cheerleaders perform throughout the game, they judge our sidelines, they judge our cheers, what we do during a timeout or halftime,” Edelen-Howard said. “We’ve been preparing a lot for those because not only are we being judged by their friends, their peers or the people in the community, but they have the opportunity for people to come in and actually judge them and give them the opportunity to win something and be shown for it.”