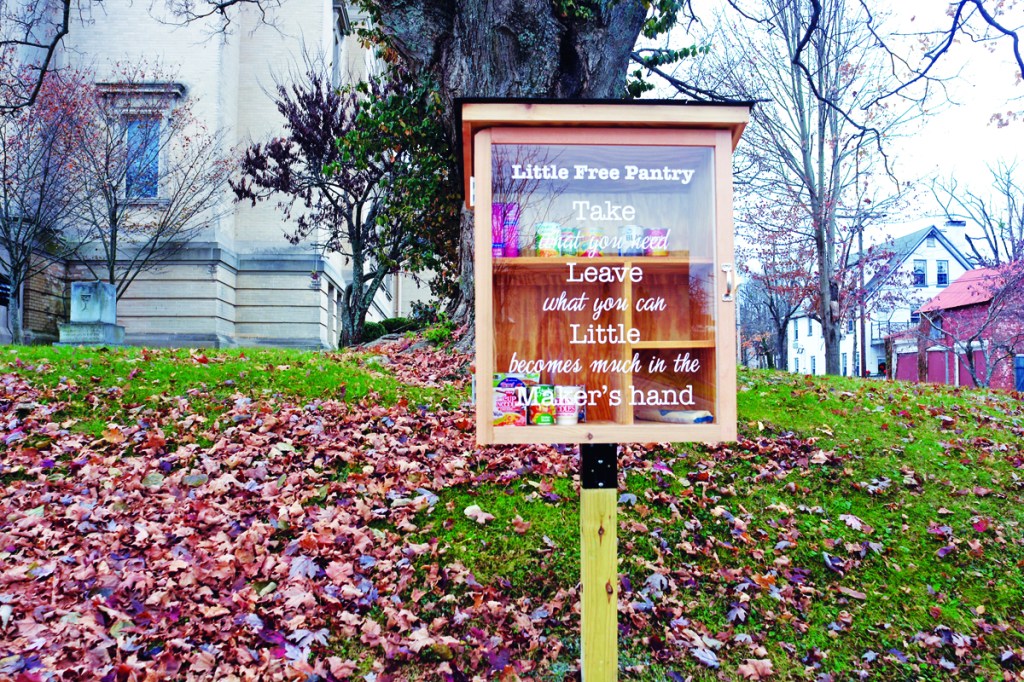 The First Christian Church officially opened its Little Free Pantry this week. The pantry is open 24/7 and is free to the whole community. (Photo by Maggie Zeysing)

“Take what you need. Leave what you can. Little becomes much in the Maker’s hand.”

Those words are inscribed on the pane of the Little Free Pantry, which First Christian Church opened and blessed this week.

The Little Free Pantry came about when Meredith Guy, a First Christian Church member of five years, saw a post on Facebook in August. The post, which her friend in Florida shared, showed how a gentleman built a Little Free Pantry in his yard for his neighborhood to use.

“Immediately, I thought, we need something like this in our community,” Guy said.

Guy, a Mount Sterling native who has lived in Winchester for about six years, said she thought her church, on Hickman Street, would be a great location for a Little Free Pantry.

She took a screenshot and sent to other members of her church, Blanton Coates and the Rev. Jerry Johns.

“I asked them if they thought the church could do something like that,” Guy said.

“I didn’t really expect it,” Guy said, adding she initially thought the would require a more bureaucratic approach. “… It almost brought me to tears when I saw how quickly they said yes.”

But everyone was immediately on board and got to work right away.

“That was the beginning of the Little Free Pantry on Hickman Street,” Guy said.

According to the Little Free Pantry website, 42-year-old native Arkansan Jessica McClard founded the mini pantry movement. She started the pilot project in 2016 as a way to feed neighbors and nourish neighborhoods by taking action in a grassroots way.

Since its inception, people across the country have used resources provided by the Little Free Pantry website to start pantries in their neighborhoods.

Guy said she was lucky members of her church were highly skilled carpenters. By October, the pantry was practically ready to go.

There are people in the community, Guy said, that suffer from hunger. According to the U.S. Department of Agriculture, 11.1 percent of American households experienced hunger in 2018. Kentucky is among the Top 10 states that have the highest percentages of households who experience hunger.

“The elderly and children don’t have enough to eat even with social programs,” Guy said. “This will help bridge that gap.”

“We know it’s not a cure all… it’s not a perfect system, but we do think having a place in town where they can go and get free food, it’s beneficial to the community,” Guy said, adding the pantry is open 24/7.

Guy encourages people to stop by and fill the pantry.

“We want people keep this pantry going because we think it’s important,” she said.

She doesn’t anticipate it being too full that donations won’t fit, but if that is the case, Guy said people can drop off donations inside the church.

“Our goal is for it to be a community pantry,” she said.

“That outreach brought a lot of awareness to our congregation about food insecurity, especially with children and school age children,” Guy said.

Keeping children in mind, Guy said the church made the pantry to be just tall enough for children to reach in and grab food if they need to.

Guy said she hopes people realize how important it is for Clark County to make grassroots efforts such as installing the Little Free Pantry to help one another.

“There are people in Clark County for various reasons — due to age, due to transportation limitations, etcetera — that do not have access to food on a consistent basis and do suffer from hunger,” Guy said. “I believe no one who lives in a country that has as many blessings as our country does should suffer from hunger…

“I’m not comfortable knowing that there are people who are hungry and I have children at home who are never hungry… It’s up to us to take care of one another.”

Even if people don’t use the pantry or can’t donate, Guy said she hopes people know there are others out there who care and who want to help.

“In a very small way, we are trying to lessen the needs of the hungry in Winchester, and that makes me very happy,” Guy said.