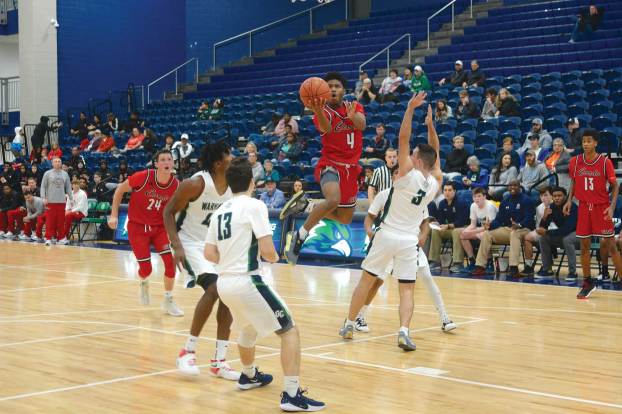 KJ Rucker shows his athleticism by getting through four Great Crossing defenders to score a layup. (Photo by Roman West)

George Rogers Clark’s boys basketball team played in their first scrimmage of the season on Saturday as they traveled to take on Great Crossing in Georgetown.

The Warhawks were coming off their first win as a team in school history, beating Carroll County in the first-year school’s first scrimmage.

GRC put their foot on the gas early, and their new, fast-pace style of play was apparent early. A 12-2 Cardinals’ lead forced the Warhawks to call their first timeout just minutes into the game.

“It was good, it was fun. I think we did some really good things, I thought we were very aggressive defensively,” GRC head coach Josh Cook said. “We’ve got to push the basketball more on offense, but I think we pressed about 28 of the 32 minutes. I think we showed that our guys are going to have to keep improving their conditioning, but it was a good start in the right direction.”

The Cardinals’ full-court pressure was too much for Great Crossing early, and the team took a 17-6 lead into the second quarter.

But the Warhawks weren’t ready to give up, and they opened the second quarter on a 7-0 lead to cut it to a four-point game.

The Cards were able to regroup behind senior Lincoln Bush, who scored a team-high seven points in the second quarter, taking a 31-24 lead into halftime.

“I thought he had a heck of a game, I thought it was a great start for him. He went against another solid inside player in Jaylen Barber and he played well,” Cook said of Bush after the game. “He raised his game. He ran the floor well, got great positioning and was very positive out there.”

Bush would end the game as the leading scorer, finishing with 22 points.

The Cardinals were able to extend their lead in the third quarter as junior Jared Wellman hit three 3-pointers.

A scary moment happened in the fourth quarter when starting guard KJ Rucker hopped off the court on one foot, but Cook said he’ll be good to go in the future.

“It was just cramps. We probably could’ve put him back in but with it being a scrimmage, it was good for us to experience that,” Cook said. “It gave us a chance to have some other guys make decisions and have other guys talk over the last few minutes.”

One of the guys who stepped up after Rucker went to the bench was Jerone Morton, who scored eight of his 15 points in the game’s final period.

The Cardinals were able to close out the game and picked up a 66-53 win in their first scrimmage of the season. They hit the floor again Saturday when they travel to Inez to take on Shelby Valley at 2:10 p.m. at the Booth Energy Center. The regular season tips off Dec 3. at home against Bath County.