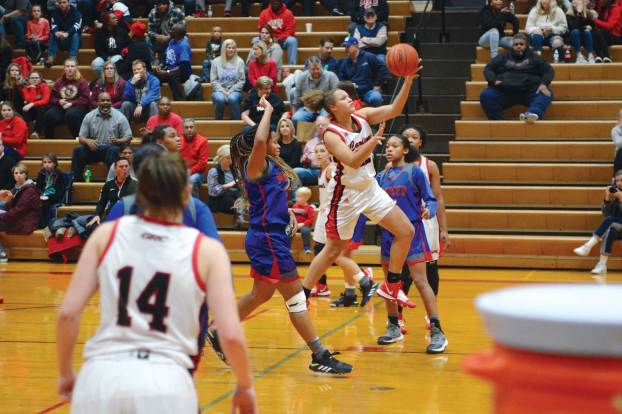 Tyra Flowers gets through the defense to finish a tough layup. Flowers finished with 11 points. (Photo by Roman West)

Letcher Norton Gymnasium hosted its first George Roger Clark basketball game of its last season as the home gym of the GRC Cardinals. The boys and girls varsity teams opened up their seasons with a doubleheader on Tuesday night.

The girls took on Mercer County, a team that has won two state championships in the past three seasons.

None other than Kennedy Igo scored the first points of the season for the Lady Cardinals. They then went on to score the next 10 points and wouldn’t look back after that.

Their defense held the Titans to 22 points in the first half, and their offense was on fire, taking a 37-22 lead into the break.

The Lady Cards were able to extend their lead throughout the game until the fourth quarter when turnovers became an issue, allowing the Titans to cut their deficit to 10 points with six minutes to play. GRC was able to regroup and put the game out of reach on their way to a 72-56 win.

“We got the win and I’ll never complain about a win,” head coach Robbie Graham said. “We were sloppy tonight in a lot of areas. I think it was our turnovers that kept them in the game. But we played hard and competed, we’ve got to clean some things up but I’m pleased with the effort.”

Brianna Byars was the leading scorer, finishing with 16 points. Igo finished with 14, Tyra Flowers had 11 and Trinity Gay and Erica Berry each had 10.

The boys game started nearly identical to the girls as the Cards jumped out to a 14-0 lead to begin the game.

After leading 25-8 going into the second quarter, GRC stepped up their intensity on the defensive end of the floor. Their full-court press caused several consecutive Bath County turnovers, allowing the Cardinals to open the quarter on a 13-2 run.

The highlight of the night was at the end of the third quarter with the Cardinals with a commanding lead. Jared Wellman jumped Bath County’s passing lane, got the ball up the floor to Jerone Morton under the basket who then dumped it off to KJ Rucker who got it back to Wellman for a layup.

That unselfish play allowed the Cardinals to come away with an 81-48 victory.

“We shared the basketball. We tried to get out and run transition,” head coach Josh Cook said. “Our kids made a lot of good reads and made unselfish plays.”

The Lady Cardinals will be back in action Saturday as they travel to take on Great Crossing. The boys team will play again Friday as they host reigning 10th Region champs Campbell County.

Basketball season for George Rogers Clark tips off tomorrow, Dec. 3 for the boys and girls teams in a doubleheader... read more