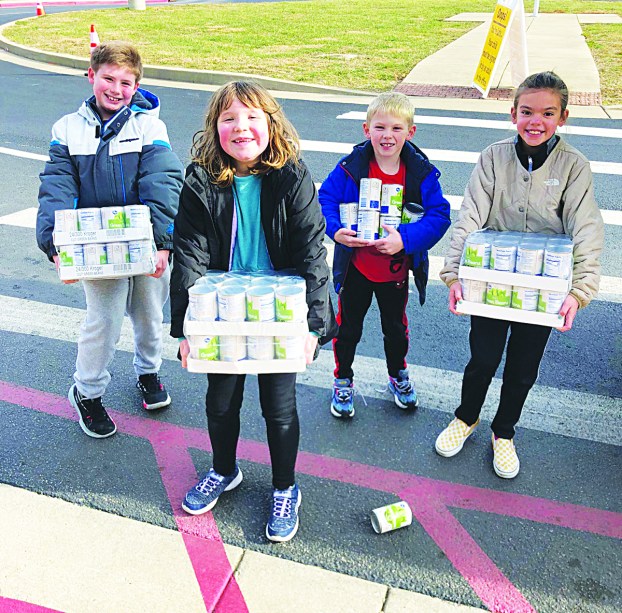 The K-Kids set a goal of 1,000 cans, but went over, collecting 1,364 cans in all. This year was K-Kids’ second year participating in the Operation Happiness food collection.

Michael Nelson, a third-grader in K-Kids, said they set the cans out on the curb for pickup Friday. Operation Happiness volunteers will use the cans Wednesday to give to those who registered.

Ozzy Skinner, also a third-grader in K-Kids, said Operation Happiness is an event where people in need can go to get food, coats, jackets and more.

At Justice, teachers recommend students to be involved. There are about 25 students involved in K-Kids this year.

“I think their all-time favorite service project is trash pickup around the school,” Skinner said. “And it’s neat to watch when they do it. A couple of days later, they’ll go out to the playground and if they see trash, they’ll go pick it up, and they will say something to their peers about don’t throw trash, don’t litter, keep it clean.”

Skinner said she loves seeing the students grow throughout their involvement in the club.

“I think one of my favorite stories is our former president, who’s now a fifth-grader. When she started the program, she was one of our original members,” Skinner said. “She wouldn’t say more than two words in front of anybody in the class. In the leadership day last year, she led the K-Kids speech. So it’s a very powerful group.”

Eli Dotson, a third-grader involved in K-Kids, said he loves to help the community.

“I like that we get to help the community and do fun things,” he said.

“My favorite thing is when we send the letters to Ecuador,” he said.

Ozzy said his favorite part of K-Kids was the ice cream party at the end of the year, but he also loves to help people throughout the year.

Eli said for the canned food drive, K-Kids put up posters to advertise.

Michael said they had to convince teachers and students to donate.

“We do anything we can to get a lot of cans,” Michael said.

“I think it’s important because, during the winter, there are a lot of families that can’t feed their families and don’t have winter clothes, and Operation Happiness helps them get stuff they need for winter,” he said.

Skinner said she is proud to see the students come together for the food drive and work as a team.

“It’s really neat to see them work together as a team,” Skinner said. “When we start the beginning of the year, we do a lot of team-building games, and they’ve got to learn that if you’re going to do the project, do it successfully, one person can’t do it.

“… After we do a project, we always sit down the next meeting and talk about how we change something. And it’s neat to hear the kids talk about how they change the world at their age.”

Eli said it makes him feel good to help people, and he has learned a lot by being a part of K-Kids.

“I think what I learned is how to help the world and how to treat people like how they want to be treated,” he said.

Michael said he’s learned a lot because of K-Kids, too.

“I learned a lot more about our community and how lucky we are and how we need to help the people in our community,” he said.

Every student at Clark County Preschool went home a little warmer Monday thanks to Kamble Metz and the Miss Nancy’s... read more