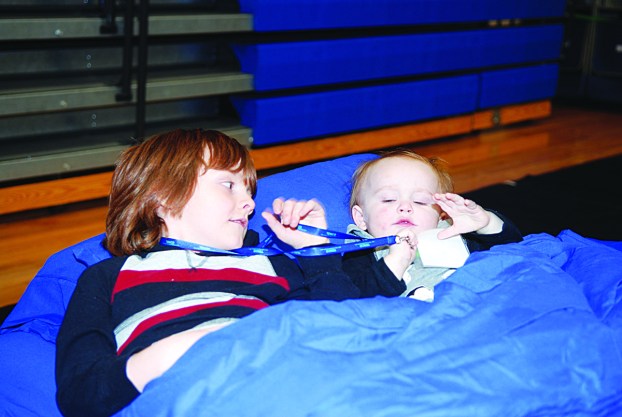 Thomas May, left, and brother Jason May try out Thomas' new bed Saturday afternoon at Justice Elementary during the Sleep Dreams event, which provided beds, bedding and other items to 30 Justice students. (Photo by Fred Petke)

Thirty Justice Elementary students started school this week with a new bed, and hopefully a good night’s sleep as well.

Saturday afternoon, the students received their new beds, complete with sheets, comforters and pillows, at the school during the Sleep Dreams program.

Other sponsors gave them a backpack filled with pajamas and other goodies. They could also get their own stuffed animal, made on site.

Students who received a bed did not have one at home, said Jessica Durphy, who organized the event for its second year.

“They don’t have a bed of their own,” she said, and may be sleeping on the floor or elsewhere.

The school’s counselor selected the names of those who would receive a bed.

All 30 beds were set up in the school’s gym, already made with the new sheets and bedding, when the children and their families arrived Saturday afternoon.

Durphy said she participated in a similar event in Montgomery County two years ago, and decided to bring it to Clark County in 2018.

“When I saw the expressions on kids’ faces when they got their beds, I thought, ‘Why not bring it here?’” she said.

“We intended to do 25 but the (George Rogers Clark High School) bass team gave us some extra money, so we bought extra beds,” she said.

The program will rotate through Clark County’s elementary schools, she said, with a different school each year.

Event sponsors include The Williams Agency, Leggett & Platt and others.