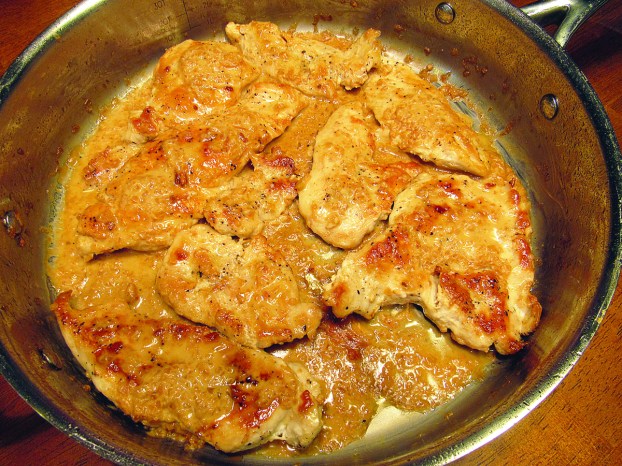 Nailed It or Failed It: One Skillet Chicken with Lemon Garlic Cream Sauce

I was trying to come up with something for supper Saturday when I found this recipe in my stash. I found it in 2015 at litttlespicejar.com.

Using a mallet, pound the chicken breasts to 1/2-inch thickness. Sprinkle salt and pepper on both sides.

Position a rack in the lower third of the oven and preheat to 375 degrees.

Heat the olive oil in a large oven-safe skillet over medium high heat. Add the chicken and brown on both sides for two to three minutes per side. If the chicken isn’t completely done it will finish cooking in the oven. As the chicken cooks, remove it to a plate as you continue to cook more chicken.

Reduce the flame to medium, add the shallots and chicken broth mixture to the pan. Using a whisk, scrape the bottom of the pan so all the brown bits are loosened. Let sauce reduce for about eight to 10 minutes or until about 1/3 cup remains.

When the sauce thickens, remove from the heat and add the butter. Whisk until completely melted. Add the heavy cream and whisk to combine. Put the skillet back on the burner and let the mixture cook for about 30 seconds, or until heated. Do not allow to boil.

Remove from heat, add chicken back to pan.

Drizzle the sauce over the chicken. Place in oven for five to eight minutes or until heated through.

Top with chopped parsley or basil and serve.

After reading the ingredient list and realizing I had everything I needed to prepare this recipe, I knew it was on the menu for that evening.

Late Saturday afternoon I started preparing the recipe by first cleaning the chicken.

Next, I placed each piece of chicken, separately, in a bag and pounded each with my meat mallet until it was about 1/2 inch thick.

It’s easy to pound chicken. If you don’t have a meat mallet, you can use a rolling pin or even a can of vegetables. You just whack it a few times and viola, your chicken is uniform so it cooks quicker and evenly. This is a good way to take out your frustrations just don’t get carried away and whack too much or your chicken will be too thin.

I sprinkled the pounded chicken pieces with salt and pepper and then started heating the skillet.

While the second batch was cooking, I lowered one of the racks in my oven and turned it on to preheat.

Once the chicken was done, I used my food chopper to chop a small red onion. Then I mixed the broth, lemon juice (I used fresh lemon juice) and minced garlic.

Since I’m not a spicy food lover, I left out the red pepper flakes.

I dumped the chopped onion into the skillet then poured in the liquid mixture. I used a whisk to scrape the browned bits off the bottom of the pan — you know you get tons of flavor from those little bits.

Once the liquid had reduced to about a half cup, I decided it was reduced enough because I was getting hungry and wanted to get this meal on the table.

I removed the skillet from the heat and added the butter, using the whisk to stir the mixture until the butter melted.

Next, I poured in the heavy cream while continuing to whisk.

I placed the skillet back on the warm burner for about a minute then placed the cooked chicken back in the pan.

I used a spoon to scoop up the sauce and drizzled it over the chicken.

I put the skillet in the oven to get everything hot (I’d cooked the chicken long enough I knew it was good and done). It only took about 10 minutes for the chicken to warm back up and we were ready to eat.

Initially, I thought this dish would be good over pasta, but while cooking it, I realized 1/3 to 1/2 cup of the sauce would not be enough to saturate pasta, so we had baked potatoes instead.

Brad prayed, thanking God for the many blessings he’s provided, including the meal we were about to eat, and we were ready to give this new recipe a try.

I didn’t sprinkle the top with parsley or basil because I didn’t have either on hand. In my opinion, the dish doesn’t need it, but it probably would make it pretty if you were having guests over for supper.

One bite and I was hooked. I thought it had a nice lemon flavor.

The chicken was delicious and I had to stop myself from over indulging. There was enough for another meal and it heated up nicely.

If you prefer dark meat, boneless chicken thighs would work just as well in this recipe.

This is a definite nailed it recipe and didn’t take long to prepare so it gets a double nailed it and a special place in my self-made cookbook. I’m looking forward to this dish again.

Often when I sit down to write these columns, I check the National Days website to give me an idea... read more