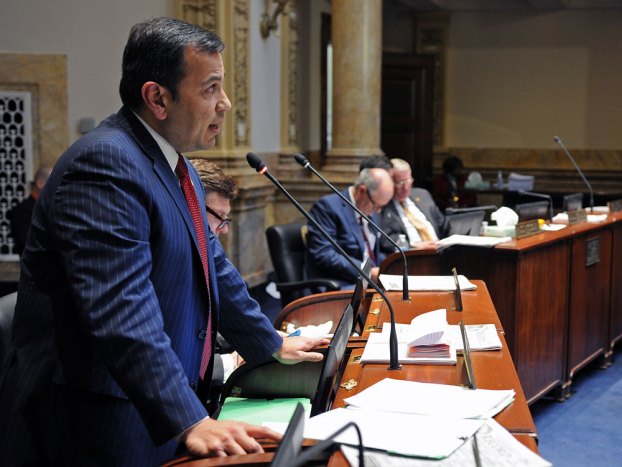 State Sen. Ralph Alvarado’s (R-Winchester) proposal to raise the age for buying tobacco and vaping products from 18 to 21 passed the Kentucky Senate Thursday and will now be considered by the House.

“The bottom line is this bill will reduce youth access to tobacco products, slash the number of kids who start using tobacco before age 18, decrease youth tobacco addiction and lead to lower tobacco use rates overall as these teens grow and mature into adulthood,” Alvarado said. “It is common-sense law that is relatively easy to implement.”

In an interview with the Sun Thursday night, Alvarado, a medical doctor and the bill’s main sponsor, said he pre-filed his bill before a similar federal bill was rolled out, so he changed his to conform to that one, and he removed status offenses for minors who are caught with tobacco.

“We saw that wasn’t really working,” he said. “If they get caught with these products, they will get confiscated, but if you’re under the age of 21, there’s not going to be a punishment unless you’re 18 to 21 … and you’re an adult and you’re caught selling to minors, there is going to be a fine.”

Alvarado said he hopes the bill will get a quick hearing in the House and “hopefully it becomes law in short order.”

“It’s been a bipartisan effort on that bill,” he said. “It’s one of those things that transcends party lines.”

“I’m glad to see it, because with the vaping epidemic we have, we’ve got to do something to curb it. We’re creating another generation of addicts in our high schools, which is a shame, and we’ve got to make better progress.”

He said most teens are getting their tobacco products from friends or acquaintances, but there is a concern about purchases.

Alvarado said there was some concern such legislation not apply to people in the military based on the idea if one is old enough to fight for his country, he should be “old enough to smoke a cigar.” However, the military exemption was taken out because the federal bill didn’t have one, and the military leaders asked there not be an exemption.

“We’ve been working on it awhile, and now that the federal government passed it, it’s made it easier to pass it on a state level to make sure we comply with federal law,” Alvarado said.