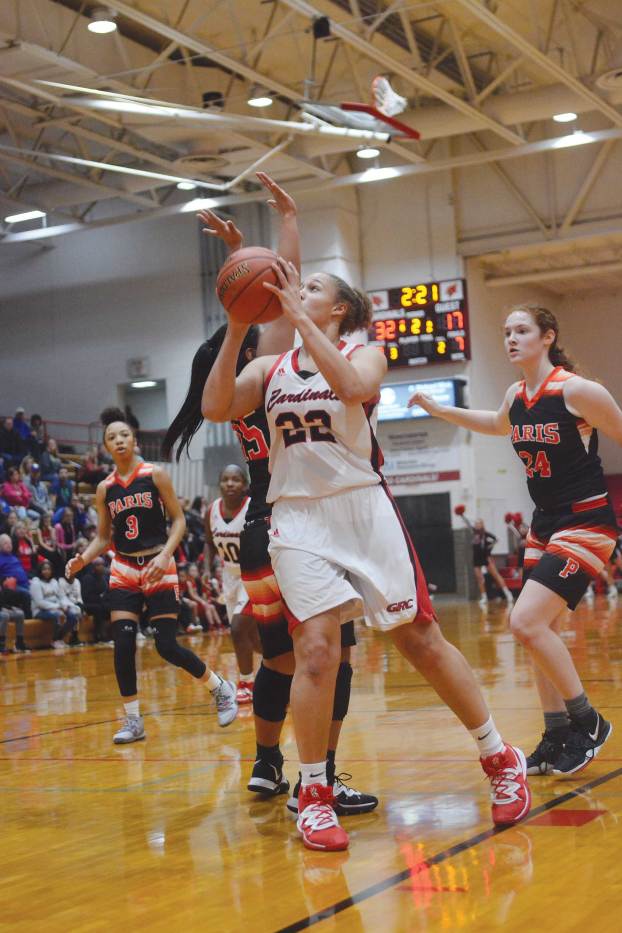 Tyra Flowers led GRC in scoring to help lift the Lady Cardinals to a win over Paris, putting them in the driver’s seat for the No. 1 seed in the district tournament. (Photo by Roman West)

The Lady Hounds snapped a 28-game losing streak to the Lady Cardinals earlier this season.

In the first matchup, GRC’s Kennedy Igo was sidelined with an injury. In Monday night’s matchup, Paris was down Zoe Strings and Sanaa Jackson, two of their four leading scorers.

The game began with a 24-second moment of silence to honor those who died in Sunday’s helicopter crash in Calabasas, Calif.

GRC began the game hot, scoring the first 13 points before Paris hit a free throw to get on the scoreboard. The Lady Cardinals kept their defensive intensity up throughout the first quarter, allowing only two more Lady Hounds’ free throws to take an 18-3 lead into the second quarter.

Paris made their first field goal 30 seconds into the second quarter but GRC continued to extend their lead. The Lady Cards led by as many as 22 points in the second quarter, but Paris battled back to cut the deficit to 15 late in the half.

GRC scored the final five points of the quarter to lead 39-18 at halftime.

“We came out aggressively but in the second quarter, we kind of relaxed a little bit,” GRC head coach Robbie Graham said. “At halftime, we had a conversation telling them that it’s a 32-minute game and we’ve got to play every possession like it’s the last possession of the game.”

Sure enough, Graham got them to come out in the second half and do just that.

They weren’t able to stop the Lady Hounds from making a field goal like they did in the first quarter, but they were close.

GRC outscored the Lady Hounds 15-4 in the third quarter until Paris’s Jamie Cowan hit a 3-pointer at the buzzer.

The Cardinals owned the fourth quarter as well, extending their lead to more than 35 points to force a running clock and holding the Lady Hounds to five points on their way to a 64-30 win.

“Our energy and focus were a lot better today,” Graham said. “It really stung when we lost over there. We had won 28 in a row, we didn’t come in very focused — I’m giving them all the credit, they kicked our tail over there — but we were more focused today, had a better start and our energy was a lot better.”

The win moves GRC to 4-1 in district play this season, putting them in the driver’s seat for the No. 1 seed in the district tournament.

“We have three goals for our team each year. We want to get the No. 1 seed, we want to win district and we want to win region,” Graham said. “We don’t count wins, we don’t do any of those things, we just want those three goals. That’s where we are once again. That first Paris game stung, but we want to be the one seed. We want these teams to know we’re not going to let go of it that easy, you’ve got to come get it because we’re going to stay and fight.”