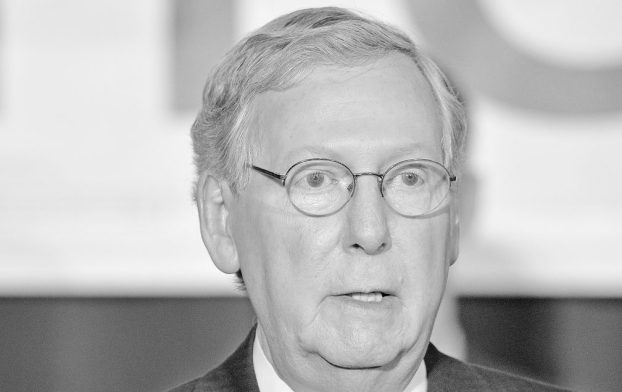 With his wife Elaine Chao, left, looking on, Kentucky Senator Mitch McConnell addresses his supporters following his victory in the republican primary, Tuesday, May 20, 2014, at the Mariott Louisville East in Louisville, Ky. (AP Photo/Timothy D. Easley)

Kentuckians are rightfully known for being hard workers. I’m glad more of them, from Paducah to Pikeville, are benefiting from our country’s strong economy, which has been bolstered by Republican policies. The Republican-led Senate just gave Kentucky workers another boost in an overwhelming vote by passing President Trump’s landmark trade deal called the United States-Mexico-Canada Agreement. This deal represents a great win for Kentucky workers, farmers and consumers, and I was proud to shepherd the agreement through the Senate.

Once in effect, the USMCA will modernize the trading framework that sends American goods — including Kentucky-made products like bourbon, cars, aerospace parts and agricultural commodities — to customers across the continent. These critical upgrades reflect the development of the new digital economy, bringing the existing deal into the 21st century.

Unfortunately, Speaker Pelosi and House Democrats held President Trump’s deal hostage for months on end. Their obsession with impeaching the duly-elected president unnecessarily delayed the USMCA and its benefits for Kentucky. American workers and families have paid the price of the Speaker’s refusal to work with President Trump.

In Kentucky, the partisan obstruction couldn’t end soon enough. Virtually every family and every industry is touched by the job-creating effects of exporting more of what we make here at home. Farmers, manufacturers and logistics providers right here in the Bluegrass State put their ingenuity to work every day making a wide-range of products enjoyed around the globe.

In 2018 alone, we sent more than $10 billion of Kentucky-made products to Canada and Mexico, representing nearly one-third of all our Commonwealth’s exports. These sales support good jobs and a strong economy for Kentucky families. The USMCA is our chance to double-down on that success, giving our workers and our communities the certainty they need.

The deal’s new, stronger automotive rules can extend the eye-popping 90 percent increase in motor vehicle exports Kentucky sold to our neighbors over the last decade. International sales of Kentucky-made cars and trucks can lead to more hiring, bigger paychecks and new investments. Just ask the folks in Georgetown … about the benefits of trade.

It’s not just auto manufacturing, either. Nearly 19,000 Kentucky manufacturing jobs depend on trade with Canada and Mexico, including at more than 500 small- and medium-sized businesses. One study estimated the USMCA could help create 176,000 American jobs, strengthening our country and generating new opportunities for families and communities.

Kentucky’s farmers are ready to take advantage of USMCA’s innovations that will strengthen and expand markets for their crops. Canada and Mexico bought more than $300 million of the Bluegrass State’s agricultural products in 2018. At a time when Kentucky growers are tightening their belts, we should do everything in our power to encourage more consumers to buy their wonderful products.

Job creators in our state have told me they can grow their businesses and benefit their communities with the USMCA. For example, the deal provides trade certainty to help our distillers by allowing more folks to raise a glass of Kentucky bourbon. Major Kentucky employers like UPS and DHL are also looking forward to USMCA’s improvements to e-commerce and customs processes, designed to better protect small businesses competing in the online marketplace. They’ll be able to better connect businesses and consumers, while protecting the environment and American workers.

By approving the deal, the United States is signaling to our neighbors that America is open for business. Once all three countries pass the USMCA, Kentucky’s workers, farmers and consumers are ready to enjoy all the benefits.

Since the day President Trump signed the USMCA with leaders of Canada and Mexico, the deal should have been a no-brainer. Speaker Pelosi should’ve allowed this deal to pass months ago, but I’m glad the heel-dragging has come to an end. I hope Democrats will see what we’re able to accomplish by working together for the people who sent us to Washington in the first place. Then, they can put partisan distractions aside and work with us to continue delivering results.

and the senior senator from Kentucky.

George Verwer, founder of Operation Mobilization, once commented, “The lack of prayer is the greatest scandal in the church today.... read more