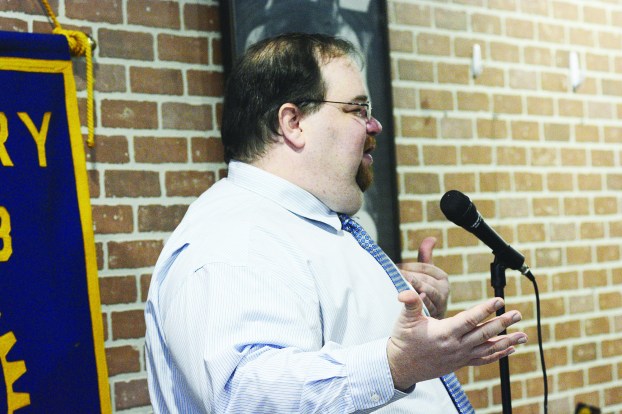 Clark County Judge-Executive Chris Pace said the "state of Clark County is strong and getting stronger" in his State of the County speech before the Winchester Rotary Club Friday at Wood's Bar and Grill. (Photo by Randy Patrick)

The state of Clark County is strong and growing stronger every day, County Judge-Executive Chris Pace said Friday, mimicking President Donald Trump in a speech to the Winchester Rotary Club.

Pace compared unemployment numbers for 2018 and 2019 through October, when it was 3.3 percent, according to the Education and Workforce Development Cabinet.

“Unless something went crazy wrong in November and December, 2019 is going to be the best employment year in the history of Clark County, and I think that’s something we can be proud of,” he said.

He credited “a change in attitude” for the improved business climate and higher employment.

“People know that Clark County is open for business,” he said. “For those of you who have been keeping up with it, we have deregulated a lot of things for development. We’ve passed ordinances in Fiscal Court to make it easier for development.”

One project Pace said he would like to see happen is an infrastructure project on U.S. 60 to provide sewer service for a potential development.

Others he wants are the widening of U.S. 60, the extension of the Bypass and the Seventh Street truck route project.

Those three are priority transportation projects, he said.

He also mentioned the possibility of a new airport coming to Clark County or nearby that would benefit businesses.

“We want to be the most pro-growth, pro-business administration in the history of the Fiscal Court,” he said, and mentioned that the county government is actively seeking partnership with the City of Winchester in that regard.

Pace said the county should be more aggressive in pursuing federal grants for projects.

He said this year the Fiscal Court approved a budget that  decreased from the previous year.

“That doesn’t happen in government,” he said.

He said there was also a net decrease in people’s property taxes “for the first time in history,” when taxes for the county, health department, library district and Cooperative Extension Service are considered together.

The judge referred to himself in his campaign as a “Christian conservative Republican,” and indicated the Fiscal Court tends to agree with him.

“We brought prayer back to the Fiscal Court meetings,” he said, explaining that he references a historical prayer at the beginning of each meeting.

“If somebody wants to cause a ruckus over that or bring a lawsuit, let them bring it,” he said.

He also mentioned that on Thursday night, the Fiscal Court passed a resolution declaring itself a Second Amendment “sanctuary city.”

He said he would also be against an abortion clinic opening in Clark County.

“We can’t think that it won’t happen here,” he said.

Pace said “we have to put people in office who believe the things we believe and are willing to stand up for those things,” he said.

Some of the challenges facing the county, he said, include having to spend an extra $150,000 on health insurance this year, finding a way to deal with the heavy load of EMS non-emergency transfers by the ambulance service, and coming up with a new administrative code to address the issue of employees accumulating excessive amounts of “comp time.”

When Pace opened the floor to questions, Scott Frasure of the United Way of the Bluegrass asked what one priority Pace and county officials would like for him to address in talking with legislators later this month.

Most realistically, Pace said, he would like for the state to address the issue of jail funding.

“We need to find a funding mechanism to cover the cost of inmates,” he said.

If he could advocate a second proposal, he said, it would be to provide some relief on the 12 percent annual increase in pension costs for county employees.

State Sen. Ralph Alvarado’s (R-Winchester) proposal to raise the age for buying tobacco and vaping products from 18 to 21... read more