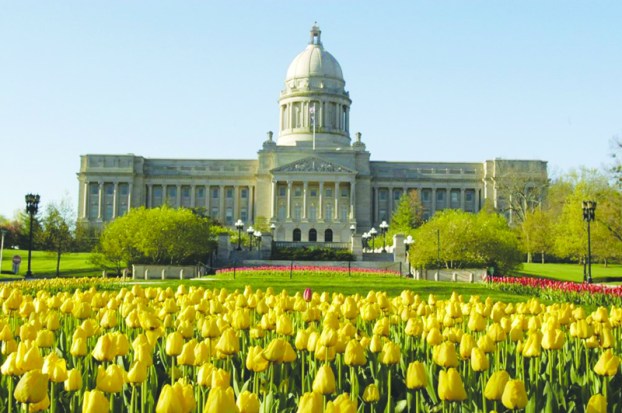 The progress Kentucky had been making to plug holes in its leaking state budget has reversed, and the state is struggling to control spending in areas that are diverting money from education, the Kentucky Chamber of Commerce has concluded in an update to a 2010 report.

In “The Leaky Budget: 10 Years Later,” the business group identifies Medicaid, corrections and public employee benefits as the major drivers in overspending, with costs rising faster for those than in spending overall.

According to a press release, when the first report was published in 2010, it appeared bipartisan policies enacted to slow the growth in spending might work, but that hasn’t been the case, Kentucky Chamber President and CEO Ashli Watts said.

“With the opioid epidemic plaguing our state and the resulting growth in the prison population, escalating costs associated with Medicaid, and continuing challenges with the pension systems, Kentucky is still struggling to fix the leaks,” Watts said.

In a departure from its earlier position, the chamber is now recommending more revenue is needed, and that requires “pro-growth tax reform.”

“The Commonwealth cannot reform or cut its way out of current funding challenges without falling further behind in areas critical to our future,” the report noted. “We must ‘look beyond the bucket’ to generate additional revenue. Kentucky needs pro-business tax reform that improves the Commonwealth’s competitiveness while producing new net revenue to support education and develop a modern workforce,” Watts said in the release.

– K-12 funding increased by only 1.2 percent, while spending on non-SEEK items has grown by 30.8 percent.

Alvarado, a medical doctor who chairs the Senate Health and Welfare Committee and serves on the Medicaid Oversight and Advisory Committee, said there is no question the huge increase in Medicaid spending is a result of former Gov. Steve Beshear’s decision to expand Medicaid eligibility to cover more people above the poverty line.

By 2017, that contributed to a reduction in the number of the state’s uninsured from 20 percent to 7.5 percent. However, according to Alvarado, even with the increased federal allocation, it greatly expanded the state’s Medicaid costs without creating the number of jobs in the health industry Beshear promised.

Former Republican Gov. Matt Bevin sought a waiver from President Donald Trump’s administration to require able-bodied adults receiving Medicaid to work 20 hours a week or put in that number of hours as a caregiver or in community service, or enroll in a secondary education or trade program, but Gov. Andy Beshear, son of the last Democratic governor, rescinded the waiver request that had been blocked by a court.

“We were facing about a $300 million deficit last year in Medicaid, and we ended up not having one because about 70,000 people found private employment, so they got off the rolls of Medicaid,” Alvarado said.

But now the state is again facing a deficit in the state-federal program for the poor, he added.

“Almost a third of Kentucky’s population is on the Medicaid rolls right now, so it’s a huge cost driver,” Alvarado said.

Another driver, he said, is a lawsuit against the state for underpaying state hospitals as part of a budget adjustment. The state lost the suit and will have to come up with $420 million to pay, he said.

The senator said Bevin’s waiver request proposal also included a federal match program for nonemergency medical transportation to get those with substance abuse disorders to treatment and rehabilitation centers, and that could go away with rescinding the waiver.

Alvarado said the opioid drug crisis is a big part of what’s pushing increases in jail and prison costs, but he is undecided about some of the correction reforms being proposed to alleviate the inmate population such as bail reform and raising the dollar threshold for a theft to be considered a felony.

The Bevin administration increased K-12 funding for education without blowing up the budget, but most of the non-SEEK (Support Education Excellence in Kentucky) funding increase has to do with funding pensions, he said.

“For the first time, some would argue … that system was fully funded under the Bevin administration. … I think that’s what’s driving that number is the pension obligations,” he said.

Alvarado said to restore the cuts to higher education funding Beshear wants to do, the legislature would have to come up with more than half a billion dollars.

“To restore that would be a huge budget item also for the state,” he said.

Yates had not yet read the report or talked with anyone from the Kentucky Chamber about it, but said he was more inclined to address the issue through spending cuts than with revenue.

The lawmaker who has been in office a year, said there’s a change of attitude in the General Assembly to “keep Kentucky on a more fiscally responsible path.”

“I don’t know that more money fixes every problem, and I think that in the past it’s what we’ve done,” he said.

Yates said he may have “a different story” after going through the budget process this year.

Nancy Metz was a teacher with a big heart who helped disadvantaged kids, and her daughter is carrying on her... read more