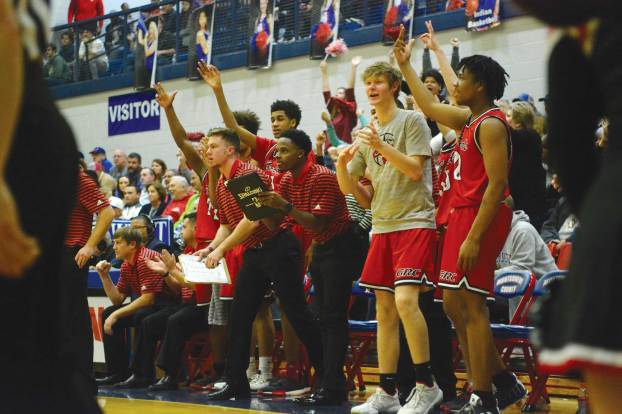 The George Rogers Clark bench gets excited late in the game in the earlier matchup this season with Montgomery County. (Photo by Roman West)

GAME OF THE WEEK: GRC boys basketball vs. Montgomery County

GRC won the first meeting this season 59-52 two weeks ago at Montgomery County, pushing their streak to eight straight wins over the Indians. A win on Friday would put GRC one game away from tying

Clark County holds the lead in the all-time series over their rival, winning 95 of the 140 games between the schools. The 140 games against Montgomery County is the most of any Clark County opponent. (h/t Mike Rogers)

A win against the Indians would put GRC at 5-0 in district play, guaranteeing at least a share of the regular-season district title.

Jerone Morton was the star of the night in the earlier matchup, scoring a game-high 23 points, including nine in the fourth quarter, to help give GRC the win.

Rickey Lovette was Montgomery County’s best player earlier this year, picking up a 13-point, 10-rebound double-double against the Cardinals.

Since they met Jan. 17, both teams have gone 3-0 with one overtime win. GRC has picked up wins against Breathitt County, Bourbon County and Scott while Montgomery County beat Madison Southern, Bath County and Franklin County.