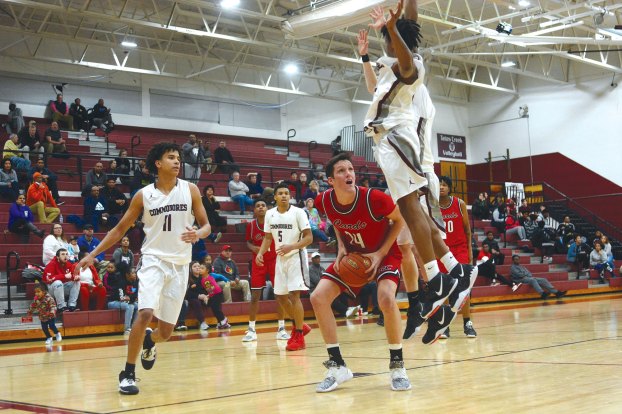 Lincoln Bush gets two Tates Creek defenders to bite on a pump fake late in Tuesday night’s game. Bush led the Cardinals in scoring with 14 points. (Photo by Roman West)

Clark County entered the game winning their previous 10 matchups with the Commodores, but Tates Creek has one of their best teams in a decade this season. Tates Creek just entered Dave Cantrall’s state-wide ratings at No. 25 this week.

The Cardinals were without one of their starters Jared Wellman, who was out with sickness.

“Jared Wellman’s somebody you can’t replace,” GRC head coach Josh Cook said. “He’s out there communicating, talking to the team, even when they might not want to listen to him.”

GRC fell behind early in the first quarter, giving up 11 straight points to Tates Creek midway through the quarter. This led to a 19-10 advantage for Tates Creek heading into the second quarter.

Tates Creek was able to push its lead to 13 early in the quarter, but the Cards closed out the half by scoring the final six points, cutting the Commodores’ lead to 29-24 at the break.

GRC opened up the second half with a bucket, making it a one-possession game, but Tates Creek wouldn’t surrender their lead.

The Cards would fall behind by as many as nine midway through the quarter but managed to fight back near the end of the period.

However, a turnover in the closing seconds cost the Cards an opportunity to once again cut it to a four-point game and gave Tates Creek the ball where they made a 3-point shot at the buzzer to extend their lead to 10 going into the fourth quarter.

After trailing by two possessions or more for most of the quarter, GRC made one last run at the end of the period.

Trailing 60-52, Trent Edwards hit a 3-pointer to cut it to a five-point game. Edwards then got a steal on the inbound play, was fouled and made both free throws. Down three with less than a minute to go, Jeremiah Mundy-Lloyd then got another steal on an inbound play, giving the ball back to GRC with a chance to tie.

The Cardinals failed to score on the play and Tates Creek hit their late game free throws to give the Commodores a 65-59 win over the Cardinals.

GRC is back in action Friday when they host Montgomery County at 7:30 p.m.