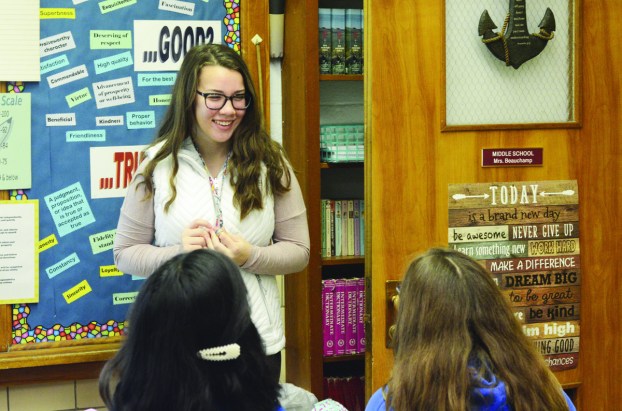 Kamble Metz, 14, vsited friends and former classmates at St. Agatha Academy, where she talked to students about the foundation she set up in memory of her mother, Nancy Metz, who was a teacher at Clark County Preschool. (Photo by Randy Patrick)

Nancy Metz was a teacher with a big heart who helped disadvantaged kids, and her daughter is carrying on her legacy in a big way.

Kamble Metz, 14, a freshman at George Rogers Clark High School, started the Miss Nancy’s 2nd Family Foundation last year with the help of her older siblings to provide material aid to students at Clark County Preschool. So far, the group has raised nearly $10,000.

Monday morning, Kamble spoke to younger students at her former school, St. Agatha Academy, which has adopted the foundation for Catholic Schools Week.

She urged them to support her work in memory of her mom, who died of colon cancer last June.

“When my mom passed, we sat around, and of course we were sad, but after a couple of months, we took it upon ourselves, and I decided we should make a foundation, and we called it the Miss Nancy’s 2nd Family Foundation because my mom always said that her students in her classroom were her second family and she always took care of them by doing little acts of kindness for them,” she told the children.

Many of the kids at the preschool are foster children or live with their grandparents, and some don’t even know their parents. They are either low-income or have disabilities. They may not have things other kids do.

“I want you to know that this money is going to little kids who need your help … and it’s a great thing you guys can do,” she told the students.

After her brief presentation at the cafeteria, Kamble went to classrooms to visit some of her former teachers and classmates.

Her father, J.D. Metz, and a former administrator at Clark County Preschool, Brenda Sipes, accompanied her.

Metz is proud of what his daughter is doing.

“She’s amazing. While I was sitting around crying and couldn’t function,” he said, Kamble and her sister Kalyn, a lawyer, and brother Jerod, a law school student, were making plans to honor their mom by starting a foundation to continue those small acts of kindness for which she was known.

The first project, Kamble said, was to give each preschool student a $5 gift McDonald’s gift card at Thanksgiving so they would be able to eat out during the holiday break. Then at Christmas, they provided each student a hat and gloves and an opportunity to meet Santa Claus and have their picture taken with him. Now they’ve got other things in the works, including giving each student a toothbrush and toothpaste during Dental Health Week.

“It’s the little things that we take for granted that they don’t have that we do,” she said.

Metz said his wife knew what it was like at different times in her life to have and have not. When she was 21, she had to quit college at Morehead State to come home and help her mom raise her little brother. She knew what it was like to have to apply for public assistance, to work long hours at a department store to make ends meet. She understood.

“She had so much empathy for the kids at the preschool because she could identify with them. She knew what they were going through,” Sipes said.

She loved all the kids at the school, and didn’t only help those who were in her class, but all of them. Now her daughter and family are continuing her work, she said.

“She’s living on through the foundation, and through them,” Sipes said.