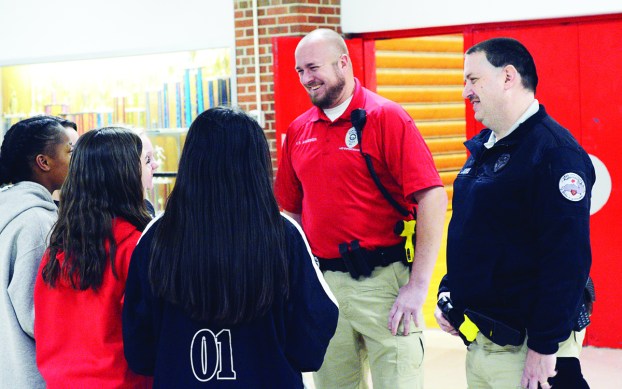 School Resource Officers Kevin Anderson, left, of Robert Campbell Junior High School and Michael Jones of the Phoenix Academy, talk with students outside the gym at Campbell Tuesday. Every school in Clark County has at least one armed SRO. (Photo by Randy Patrick)

Legislation to require all school resource officers in the state to carry firearms would change nothing for Clark County Schools, because the school district is already compliant.

“They’ve had school resource officers for close to 20 years now, and they’ve all been armed since day one,” Sheriff Berl Perdue said Tuesday, the day after Senate Bill 8 cleared the Senate by a vote of 34-1. “Personally and professionally, I think it’s a good deal. It’s something that’s needed. It kind of defeats the purpose, especially in an active shooter scenario” if the officers are not armed, he said.

“I wouldn’t have an SRO in the building that didn’t have one,” he said.

Clark County Schools recently met its goal of having an armed officer in every school except George Rogers Clark High School, which has two.

Unlike in some school districts, Clark County’s 10 officers are not provided by a local law enforcement agency, but are employees of the Board of Education. They are all special police officers who have been through the academy and receive special training.

Keith Mullikin, a former Winchester Police officer who has been a special law enforcement officer for Clark County Schools for 19 years, said the school officers are armed with handguns, pepper spray and stun devices.

“If you’re not armed, you can’t protect the kids,” he said. “I think people appreciate that we’re here. … They put their trust in us.”

SB 8, sponsored by Sen. Max Wise, R-Campbellsville, adds new protections to the 2019 School Safety and Resiliency Act, which was a response to the mass shooting at Marshall High School that killed two students and injured 18 two years ago this month.

The new measure, which now heads to the House for consideration, balances provisions to “harden” schools by investing in reinforced doors and armed SROs with mental health provisions to have at least one school counselor or school-based mental health services provider, for every 250 students.

“Protecting Kentucky’s children remains one of the top concerns of the General Assembly,” Alvarado said in a text message. “After the passage of last year’s Senate Bill 1, there was overwhelming statewide feedback from constituents urging the presence of armed school resource officers (SROs) in our schools. Senate Bill 8 is aimed at controlling who can be armed. This measure would require that these SROs be a sworn law enforcement officer, who will additionally participate in extra training to ensure that they are familiar with the culture of their particular school. This is a common sense bill and I was proud to vote for it,” he wrote.

The bill does not address funding, but the more than $120 million it’s expected to cost for every campus to have an SRO could be included in this year’s budget.

Christy said his school district already has in place many of the provisions proposed. In addition to having officers on every school campus, each school has a secure vestibule at the main entrance where visitors have to check in and show a photo ID to be allowed inside, and there are security cameras at the schools.

Christy said he believes Clark County is ahead of most other school districts.

“Our board has always agreed that the police officers need to be armed. Some of the others are catching up to us,” he said.

Stopping an active shooter isn’t the only or even the main role of a school resource officer. The officers have been able to students, conduct random searches, check doors and deal with hostile social media posts.

“Our officers build rapport with the students, and that’s more important to me than weapons,” Christy said. “We learn from kids so much that we avoid potential problems.”

There was an incident at the old George Rogers Clark High School about 20 years ago in which a student brought a gun to class and a teacher talked him into giving it up, Christy said, but there hasn’t been any kind of weapons issue in any of the schools during his time as superintendent.

Yvonne Willoughby has a sentimental keepsake she doesn’t want to keep because it belongs to someone else. She would like... read more