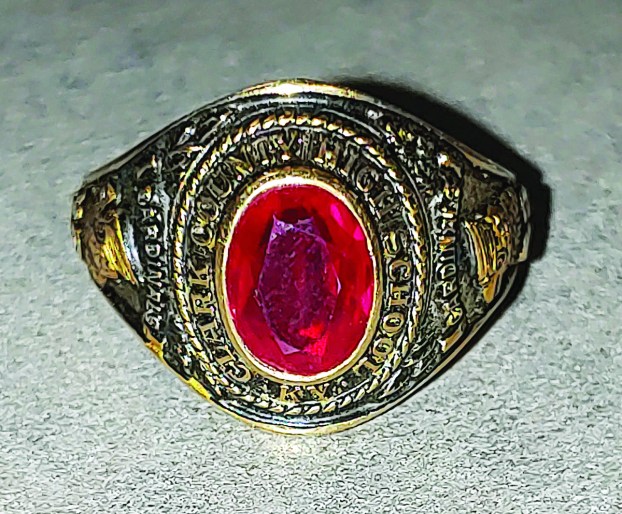 Yvonne Willoughby of Montgomery County would like to find the owner of this 1963 Clark County High School class ring.

Yvonne Willoughby has a sentimental keepsake she doesn’t want to keep because it belongs to someone else.

She would like to find out whose it is.

“It’s not mine, and it needs to go to the rightful owner,” she said of the gold 1963 Clark County High School class ring she found one day while vacuuming the carpet in an old mobile home she bought. “I’ve had it put up all these years, and to tell you the truth, I forgot about it and came across it” again recently, she said.

Willoughby, who lives in Montgomery County, said she found the ring 10 or 15 years ago or more.

“I had bought this older model trailer off these people, and I ran the sweeper one day and it felt like I ran over something,” she said. “So I stopped, and the carpet was loose on that side, and it was underneath the carpet, and it was on a chain.”

She asked the previous owners, and they had no idea whose it might be, and she tried to find out from others and couldn’t.

She said she hasn’t taken it to a jeweler to find out how many karats it is or what kind of stone is in the setting, although it is a “ruby color,” she said.

“You can’t tell the ring has never been worn; that’s how new it is,” she said.

It has the words Clark County High School surrounding the cut stone and cardinals on each side. Willoughby said it also has the initials “PLP” on it.

She said if she can find the owner, she would be willing to drive to Winchester to give it to them.

Public Servant: Clark worked his way up to director of Public Works

Many little boys are fascinated with construction equipment, be it dump trucks, bulldozers, back hoes or cement mixers Pat Clark,... read more