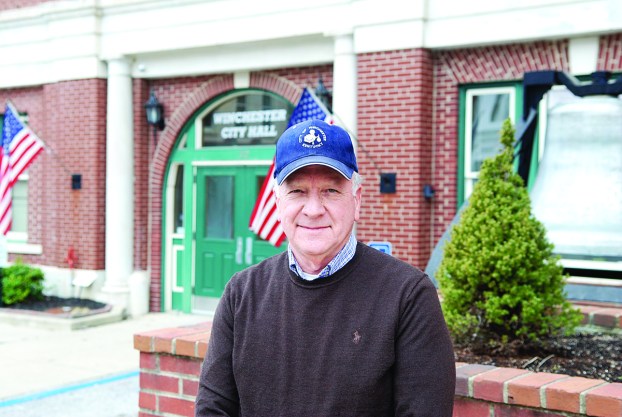 Pat Clark has been the director of Winchester Public Works since 2008. (Photo by Fred Petke)

Public Servant: Clark worked his way up to director of Public Works

Many little boys are fascinated with construction equipment, be it dump trucks, bulldozers, back hoes or cement mixers

Pat Clark, director of Winchester’s Public Works Department, was one of those.

Clark had the added bonus of a father who owned a construction company and had the real things.

“As a boy growing up, I always liked heavy equipment,” Clark said. “I thought I was on top of the world if he’d let me get on a bulldozer with him. It’s a feeling that’s hard to describe. When I was on a piece of equipment with Dad, I didn’t think it could get any better.”

When he turned 16, Clark started working for his father’s company during the summer and when he wasn’t in school. When it was time for college, Clark earned a degree in history.

“I was looking to get into teaching,” he said. “I enjoyed (history) in high school and grade school. I always felt you could learn from it. When I went on to college, I took a lot of non-U.S. history courses.”

Clark’s father, though, passed away in 1974 while Clark was in college.

Rather than sell the company and lay off several “very loyal” employees, Clark ran the company before eventually selling it in 1990.

Two years after selling the company, Clark started working for the City of Winchester as a janitor and maintenance worker covering City Hall and the Winchester Police Department. When an operator position with Public Works opened in 1996, Clark applied and was hired. In January 2008, he was appointed director of public works, he said.

The department provides many more services than repairing potholes or clearing snow and ice from the streets, he said. During the course of the year, the department’s 15 employees handle everything from mowing city property to concrete work to repairing storm drain boxes to painting lines and curbs on city streets.

“We could have a sign crew going all year,” he said. “We have about 85 lane miles of city streets to maintain.”

The mileage doesn’t include the 50 or so unnamed and 13 named alleys in town, he said.

“We get spread thin at times, but I have a great staff,” Clark said.

Every once in a while, Clark still manages to get on a piece of equipment and work.

“I’m limited on getting on equipment and operating, but there are times I will,” he said. “The times I can get on a backhoe, I do enjoy it. It’s a break from the managing and delegating.”