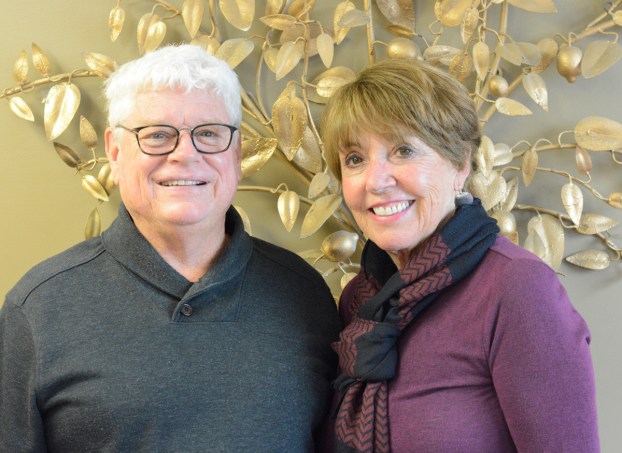 Craig and Linda Bridgewater celebrate the 25th anniversary this year of their business, Bridgewater Real Estate.

When Linda and Craig Bridgewater became partners in marriage, they never imagined they would someday be business partners as well.

Linda was a social worker and later co-owner of a small business.

Craig was a banker — until he wasn’t. But they since found success and satisfaction as Realtors.

Linda started selling property 30 years ago, and Craig joined her three years later. At first they worked for other people — Coldwell Banker, Barlow Homes, Cecil Homes — before starting their own business, which proved to be a good move.

“I never thought I could sell real estate … because I’m not a math person, but my husband is, so we make a great team. He can add it up, and I can spend it,” Linda said.

They both laugh. It’s a business partnership that has worked for a quarter century.

“It’s been fun. You think 25 years is a long time, but when you’re doing something you enjoy, it’s not,” she said.

Married for 45 years, both are originally from Clark County. Craig has always been here, and Linda moved to Lexington with her family when she was a child.

They met at Georgetown College when a childhood friend introduced them, and later married. Linda earned degrees in social work and worked for Comprehensive Care for several years. Craig worked for the former Winchester Bank until he was laid off.

Linda thinks it was divine will.

When Linda was working on her master’s degree at the University of Kentucky, she became pregnant with their son, Barrett. She and another woman opened a needlepoint business, but she lost $10,000 in a couple of years.

Her friend Ann McDonald, a real estate agent, then asked her if she had thought about getting her license. No, she hadn’t.

Then when they went to Myrtle Beach with Craig’s dad, a stranger came and sat with them and started talking and asked Linda if she was in real estate.

Then her mother asked her: “Have you thought about being a Realtor?”

Her mom said she would pay for her to go to school and take care of Barrett. Linda checked into the school on Friday. Classes started the following Monday. She surprised herself by passing the test. Her first year in business, with McDonald, she was her top producer for two months.

“It was totally God-sent,” she said. “It was laying right there.”

Craig calls Bridgewater Real Estate a “hometown company” and a “small shop,” but it has made some big sales.

That was before the housing market collapse and economic crash in 2008, or as Craig puts it, “before the world stopped.”

The market has been slow to come back in Winchester and Clark County, just as it has in most rural communities in America.

“Most of us here think we’re about 500 houses behind where we would have been” if not for the recession, Craig said.

“You had 10 years where nothing happened,” he said.

That’s beginning to change, slowly. Interest rates are low. And it’s a “seller’s market,” because there are more people now wanting to buy than sell. Many of the buyers are moving here from Lexington.

There is especially a need for more senior housing, they said. If Rosemary Brooks Place built 30 more cottages, Craig said, they could sell them in a year.

The couple are optimistic enough that they’ve recently brought in two young agents, Brittney Combs and Megan Bailey, to join their other two agents, Brenda Sipes and Pattie J. Stubblefield.

Their effort has paid off.

The Bridgewaters like what they do because they like people and “you can see a tangible result,” Craig said. “You can get something done.”

“I like the independence of it,” Linda said. “Every day is different. … It’s the newness of it every day.”

Cyberbullying focus of next Dangers in Plain Sight

Nearly three out of five teenagers have experienced cyberbullying, according to a Pew Research Center study in 2018. The harassment... read more