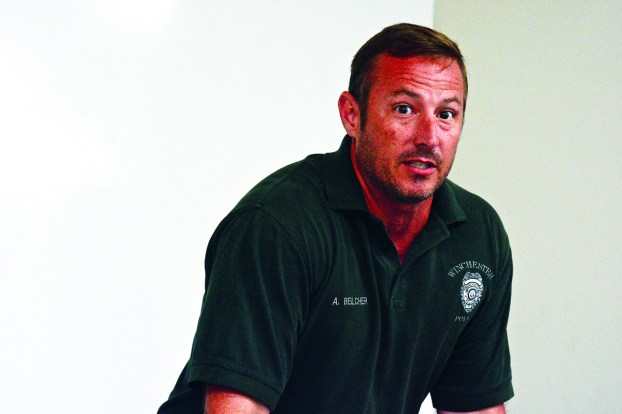 Winchester Police Detective Alex Belcher talks to the crowd at the "Community Drug Awareness" session of the 2019 Dangers in Plain Sight series earlier in 2019. (Photo by Lashana Harney)

Cyberbullying focus of next Dangers in Plain Sight

Nearly three out of five teenagers have experienced cyberbullying, according to a Pew Research Center study in 2018.

The harassment can range from name-calling or spreading false rumors to physical threats or sharing of explicit images online.

The bullying can result in anxiety and depression, or even suicide.

On Feb. 6, the Clark County Agency for Substance Abuse Policy (ASAP), in partnership with Bluegrass Community and Technical College, will host the last of its three “Dangers in Plain Sight” series, on “Online Dangers and Bullying.”

The program will be presented by Winchester Police Detective Steve Charles at 6:15 p.m. following a meal an hour earlier. It will be at the BCTC Winchester Campus.

For the first time, there will be an English-to-Spanish interpreter.

Earlier sessions were on the dangers of illegal drugs and human trafficking. WPD detectives Alex Belcher and Matt Reed made the presentation on drug abuse awareness in September, and in November, Allyson Taylor, executive director of the Office of Child Abuse and Human Trafficking Prevention and Prosecution presented the one on human trafficking, which was attended by about 60 people.

This is the second year of the series.

“This year our local law enforcement is doing the presentation on social media and bullying because they go together,” said Ramsey Flynn, who represents BCTC. “It’s very important to teach kids at a young age about bullying.”

Flynn and Melissa Stocker, director of ASAP, believe the way to prevent dangers to children, youth and adults is to educate the community to know what to look for, and sometimes it isn’t always obvious — even if it’s in plain sight.

“The whole series is aimed at parents and guardians but anyone can come,” Stocker said. “We want to educate parents that if their child is being bullied, or is the bully,” so they will know what they can do to monitor the activity and prevent it. “It’s all about identifying the behaviors and patterns and moving forward,” she said.