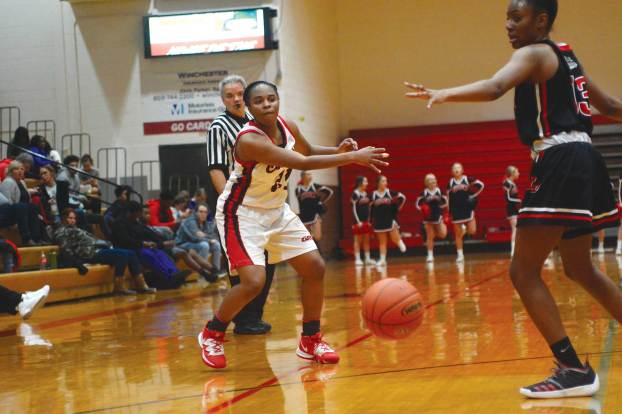 Shelbi Wilson is averaging 8.8 points per game and is shooting 51.1 percent from the field this season, the third-best field-goal percentage in the region. (Photo by Roman West)

The Lady Cardinals were one of four teams from outside the Louisville area selected to participate in the tournament, along with Ryle, Elizabethtown and Bethlehem.

The Cards finished as runners-up in last year’s LIT, falling to Ryle, the eventual state champions, 56-45 in the championship. Clark County downed Sacred Heart 59-53 in last year’s quarterfinals and Bullitt East 73-66 in the semifinals.

The Cardinals’ first game will once again be against Sacred Heart, the No. 1 team in the state according to the most recent AP poll.

The Valkyries are 17-1 on the season entering Friday’s game. Their only loss came in the Naples Holiday Shootout in Florida against Westlake out of Atlanta.

GRC head coach Robbie Graham is 2-2 against the Valkyries during his time in Winchester, splitting games on neutral floors 1-1.

The two teams met twice last year with GRC winning both contests. The Cardinals opened their season last year with a 77-62 victory over Sacred Heart and they opened their run in last year’s Louisville Invitational Tournament with a 59-53 win over this year’s top team in the state.

The Valkyries are led by Erin Toller, a University of Kentucky signee. Toller missed all of last season with an ACL injury, which came 10 months after another ACL injury. Toller is back in full swing this season, playing in all 19 games to begin the season. Toller averages 17.3 points per game and is one of the state’s best 3-point shooters, making 2.6 threes per game while shooting 43 percent.

The Cardinals will likely need another game out of Kennedy Igo like they had in last season’s opening game. Igo scored a game-high 26 points on 55.6 percent shooting. Igo will also likely be one of the primary defenders on Toller, who just went for 31 points less than two weeks ago.

Igo, along with Maleaha Bell and Hayley Harrison, made the All-tournament team last season.

Should GRC come away with a win against Sacred Heart, they would play the winner of Bullitt East vs. Ryle.

Bullitt East just cracked into the top five of the RPI after downing AP No. 3 Butler in the tournament. The Lady Chargers are 15th in the state in points scored, 38th in points allowed and ninth in scoring margin. They’re led by senior forward Lexi Taylor, who averages 14.5 points and 6.4 rebounds per game.

Ryle is the defending state champions, defending LIT champions and beat GRC 68-50 earlier this season. Despite an 11-9 record, Ryle is still one of the premier teams in the state. The Lady Raiders are led by Maddie Scherr, a five-star and the 19th best prospect in the country according to ESPN. Scherr is an Oregon signee who was recently named a McDonald’s All-American. Scherr was awarded Joyce Seymour Offensive MVP in last year’s tournament. She picked up 18 points and seven rebounds in the matchup with GRC in December.

The Cardinals could meet one of four teams in the championship should they make it there: Manual, Elizabethtown, Mercy and Bethlehem. Elizabethtown came in at No. 4 in this week’s AP poll and Bethlehem was sixth in the poll. Mercy and Manual each received votes but failed to crack the top 10, putting them at 12th and 19th, respectively.

Mercy has a two-headed monster on the offensive side of the ball with Hope Sivori and Taziah Jenks each averaging 19 points per game. Jenks also averages 10.2 rebounds per game.

Bethlehem has the state’s third-best winning percentage with its 21-2 record.

The Banshees are coming off an All A State Tournament championship and are led by junior forward Ella Thompson. Thompson is averaging 17.2 points and 8.5 rebounds per game.

Manual is the only team in the tournament let that had to win two games to get to the quarterfinals. The Lady Crimsons have one of the state’s best defenses, surrendering only 35.3 points per game. Kennedy Lee, a sophomore forward, is the team’s leading scorer (12.2 ppg) and rebounder (8.4 rpg).

Elizabethtown is third in RPI and is led by Whitney Hay, who averages 19.4 points.

The Cardinals and the Valkyries kick off the rest of the tournament today at 4 p.m. with the rest of the games to follow. The semifinals will begin at 2 p.m. Saturday and the championship is Sunday at 1 p.m.