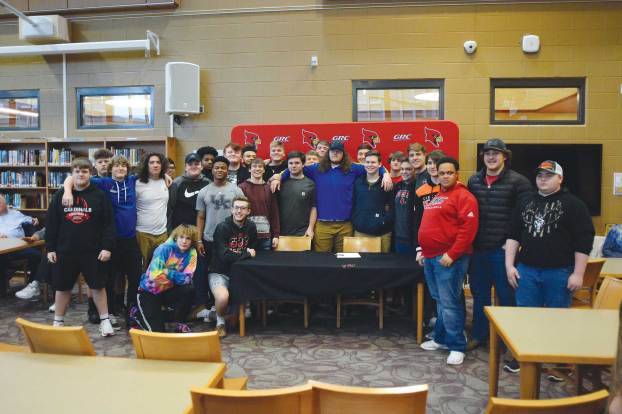 Blake Watkins, center, surrounded by his teammates after he signed his letter of intent to continue his football career at Morehead State University. (Photo by Roman West)

Watkins was one of the “Earth-movers” from GRC’s offensive line, as his head coach Oliver Lucas described them.

Watkins was a key part of the success of GRC’s run game this season. The Cardinals ran for 2,690 yards this season. Watkins pushed defenses away from the backfield to get GRC’s running back, Azariah Israel, the third-most rushing yards in the state.

“Blake’s meant everything to us,” James Stults, GRC’s assistant head coach said. “He’s a hard worker. All he does is work hard. He’s also one of the comedians of the team. But he’s really helped us bring this program back from where they were before Coach Lucas and I got here.”

Watkins was able to do this largely thanks to his excellent technique.

“He’s got great technique,” Stults said. “He’s got this flop thing where he can pull people down, he’s gotten pretty good at that. I think he’ll be able to start or at least rotate in as an offensive lineman.”

Watkins is excited to take on his next challenge at Morehead State and has high hopes of what he can accomplish.

“I hope to become an all-conference player and maybe even take it to the next level,” Watkins said. “And of course getting my education.”

Morehead State is in the Pioneer Football League conference, and the Eagles had one offensive lineman make the preseason All-Conference team as recently as last season (Josh Poe).

Watkins chose Morehead State because of the way he felt as soon as he stepped onto campus for the first time.

Home is a special place for Watkins. GRC has been his football home for the past four years, something he’ll never forget.

“My time as a Cardinal has meant the world,” Watkins said. “It’s where I met my closest friends. It’s where I developed everything and where I became a football player.”