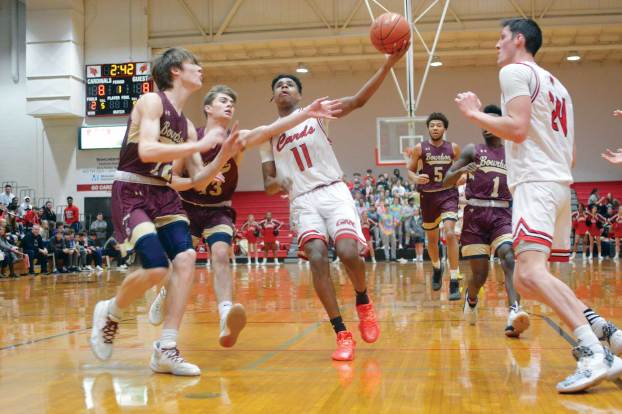 George Rogers Clark’s Jerone Morton, 11, protects the ball while he drives to the basket during the Cardinals 77-65 victory over Bourbon County Jan. 21. (Photo by Roman West)

GRC’s boys, girls teams look to lock up No. 1 seed in district tournament in doubleheader against Bourbon County

One week after traveling to the Dave Cantrall’s Rankings No. 25 team in the state’s home floor (Tates Creek), George Rogers Clark will once again take on this week’s 25th-best team on the road.

Bourbon County fell two spots in the rankings despite picking up wins against Model and Scott County last week.

It will be the second meeting of the season between the two 40th District rivals. The Cardinals picked up a 77-65 win at home Jan. 21.

The Colonels will have a different look this time around as leading-scorer Amirion Joyce will hit the floor after a suspension kept him on the bench in the first matchup.

In his first game back, Joyce dropped 32 points and went 10 of 16 from the field in Bourbon County’s win against Scott County. Joyce also made 12 of 13 free throws.

Clark County enters the game on a 34-game win streak against Bourbon County, dating back to 2003.

The Cardinals have never lost to the Colonels in February and have only lost to Bourbon County once after Jan. 21 (1980, 10th Region Championship). (h/t Mike Rogers)

To come away with a win, GRC’s “core four” (Jared Wellman, Jerone Morton, Lincoln Bush and KJ Rucker) will have to have a performance similar to the earlier matchup. The four combined for 73 of the team’s 77 points and 33 of the 36 rebounds.

A win for the Cardinals would lock up the top seed in the district tournament for Clark County.

Before the Cardinals look to put the No. 1 seed away, the Lady Cardinals will try to do the same against the Lady Colonels.

Clark County’s girls have nearly the same winning streak over their Bourbon County counterparts as the boys team, winning the previous 31 meetings between the team.

GRC won the Jan. 21 matchup 56-35, but the Lady Colonels have won five straight since for their longest win streak of the year.

The Lady Cardinals had two players in double figures in the first meeting: Kennedy Igo scored 13 and Brianna Byars scored 10.

To come away with a win, GRC will need to slow down Bourbon’s Hannah Hamelback. Hamelback posted a 14-point, 10-rebound double-double in their first meeting this season.

The girls game is scheduled for a 6 p.m. tipoff.