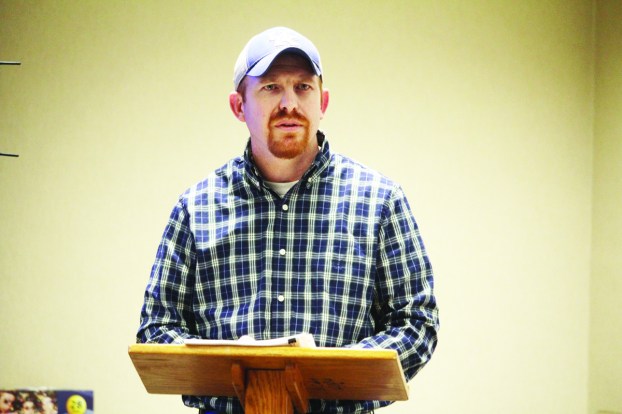 Aaron Wilson, a parent of a Clark County Preschool student, was one of three residents who spoke in favor of a new preschool facility at a meeting of the District Facilities Planning Committee Thursday. (Photo by Whitney Leggett)

The hearing  was one of three the committee will have to host during its planning process.

Three residents spoke about conditions at the preschool and asked the committee to make the preschool facility a priority-one project.

Aaron Wilson, who has a child that attends Clark County Preschool, commented on the age of the building and the lack of space for the hundreds of students.

“The facility was built back in the 1950s, so it’s definitely showing signs of age,” Wilson said. “There’s limited space there for the amount of kids — over 300 now. They’re working out of a couple temporary trailers that have been put up. I think they’d be able to serve a lot more kids preparing them for early education if they had more room.”

Wilson said the preschool is using the gymnasium as a cafeteria, which limits the staff on work with gross motor skills, especially on rainy days when students can’t use the playground or outdoor areas.

He said students have to also cross a road and parking lot to get to the playground, which creates safety concerns.

“I feel like it would do the community well to have a new facility for the upcoming children,” Wilson said.

Wells saids she previously worked with kindergarten students and is working at the preschool for the first year, so she sees first-hand how beneficial early education is for local students.

She noted a limited number of classrooms with restrooms, which creates issues for teachers.

“Just working in the building, I’ve notice a problem for teachers is we have four bathrooms in the classrooms in the upper hallway, and in the lower hallway, we don’t have any bathrooms for students that need to go. If they’re trying to potty train or they really need to go, we have to get down to ratio so we have to pull 10 kids out of the room so one can go to the bathroom. So that’s really a struggle for a lot of us there.”

She also noted issues of the shared cafeteria-gym space.

“It’s hard some days to wait for them to clean up after breakfast and put the tables away so we can come in there at our scheduled time, because we have to share with everybody, and get in our gross motor time that is needed for these students.”

She said the preschool is a special place, and the students deserve a high-quality facility.

“I feel like it’s what’s best for our students to have a new building that will provide for them what they need,” she said.

Former board of education member Judy Hicks also spoke in support of the preschool.

Hicks has long been an advocate for the early learners in the community. While Hicks was still on the board, she voted against the most recent facilities plan because it listed completion of the athletics facilities at George Rogers Clark High School as the only priority-one project, noting then that she believed the preschool deserved attention as well.

She suggested to the committee the priority-one project for the district be construction of a new preschool.

“As I traveled through the district the past few days, I noticed the stark contrast between the preschool campus and the other school campuses was rather startling,” she said. “It appears that the only campus in our district using mobile units for carrying out educational programs is our preschool facility, with not just one mobile unit, but two, and a less than stellar main building for the educational programming. Let’s fix that and develop a state-of-the-art facility for the youngest learners in our district.”

After the public forum, the committee heard from Bob Tarvin and Lincoln Theinert, representatives of Ross Sinclaire and Associates, about how to develop a facilities plan based on student population, construction needs and funding mechanisms.

The local facilities planning committee convenes every four years to create a plan which lists priority construction projects in the district.

The last facilities plan in Clark County was approved in 2016. It included completing the final phases of the George Rogers Clark High School campus as the only priority-one project.

Since the last plan was approved, the district has completed a number of the projects, totaling about $44 million.

Most notably, much of the athletics facilities at GRC was completed over the past four years. The new football stadium opened in the fall and the new gymnasium is set to open Feb. 11.

Since funding is largely based on average daily attendance, Tarvin also talked about enrollment in the district.

The committee learned about the capacity and occupancy at each of the local schools. Two schools, Baker Intermediate and Conwright Elementary, are above capacity at 118 percent and 126 percent respectively. All other schools were below 90 percent capacity except Shearer Elementary, which was at 92 percent.