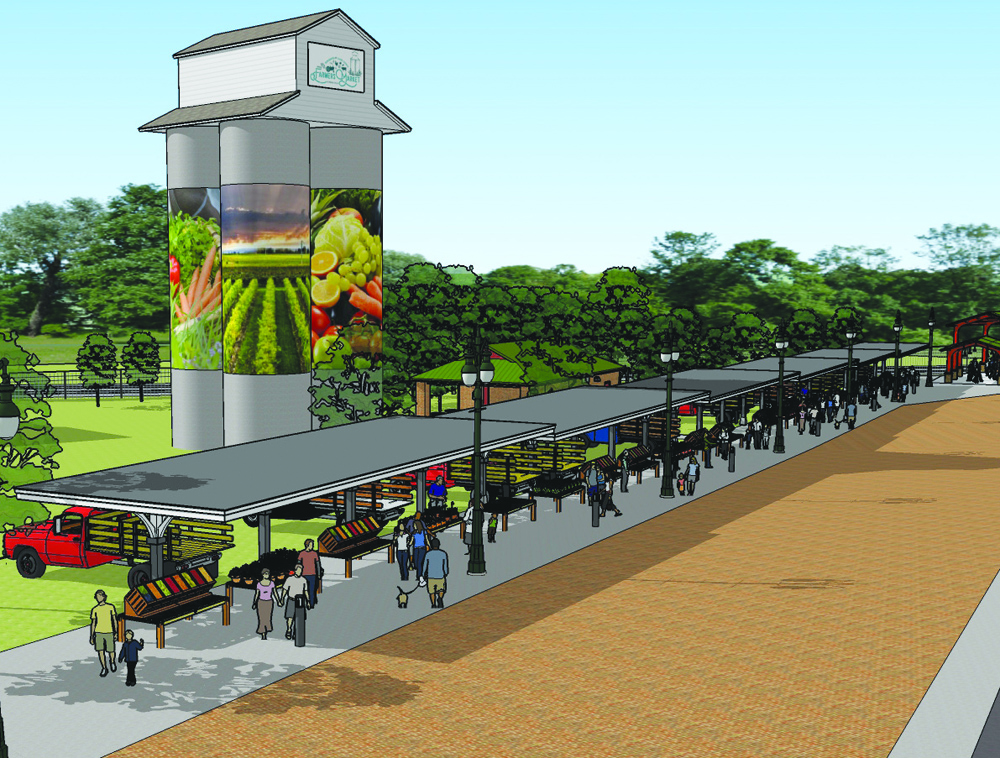 An artists’ rendering shows what a canopy for the farmers’ market on Depot Street could look like. (Image submitted)

City leaders are on board with a proposal for a pavilion project for the Winchester-Clark County Farmers Market on Depot Street that could cost upward of $500,000.

During its meeting Tuesday, the Winchester Board of Commissioners committed $200,000 toward the project if the Greater Clark Foundation approves the project.

Of that amount, $150,000 is a state transportation grant that was to have been used for the Sphar building project, and $50,000 is from the city’s capital improvement fund.

Those funds would match whatever the Farmers Market board would be able to raise in grants.

Farmers Market board members Stefan Fink and Julie Staton appeared before the commission Tuesday and said they had applied for $250,000 in state agricultural grant money from the Governor’s Office of Agricultural Policy and would also seek county agricultural development funds and possibly go after a USDA Rural Development grant.

The concept presented to city officials includes a canopy that would stretch along the new sidewalk and brick street from near Main Street to about where the railroad depot once stood. There would also be a commercial kitchen and restrooms.

An artist’s rendering also shows planted trees and the Sphar silo restored and painted with murals, as well as covered picnic table areas.

“These are concept drawings, and our budgets change, obviously, based on funding and what grants may or not be available,” City Manager Matt Belcher said.

The plans are also subject to change based on other stakeholders’ input, he said.

Belcher said there is an existing contract with GRW Engineers to design the canopy, but it does not yet include designing the other facilities.

Staton said the Farmers Market has about $58,000 of its own available for the project.

Winchester Mayor Ed Burtner said they city is committed to redeveloping the site of the Sphar building, a former seed warehouse which was recently demolished

“We have submitted to the Greater Clark Foundation that we would continue to work with them and try to redevelop this and not just tear down the building and walk away,” Burtner said.

Staton and Fink were looking for a commitment of funds from the city so it could proceed with trying to secure the other funding.

Belcher mentioned that if the transportation grant wasn’t used, it would “go away.”

“We have a year to use the funds, so we’re trying to be very timely,” Fink said.

Belcher said the city is hoping the canopy and silo project can be completed by the end of 2021, although it may take until 2022 to do the restrooms and other pavilions.

The vote was unanimous from Burtner and commissioners Ramsey Flynn and JoEllen Reed. Commissioners Kitty Strode and Shannon Cox were unable to attend the meeting.

The Farmers Market board members were enthusiastic about the plans and the future of the organization.

“The market is starting to gain momentum now, and we want to increase our member base,” Fink said.

“There’s still a whole lot of work to be done, especially with regard to the silo,” the mayor said, but there’s a “conceptual commitment, you’re going to apply for funds … and you’ll talk further with us about this.”