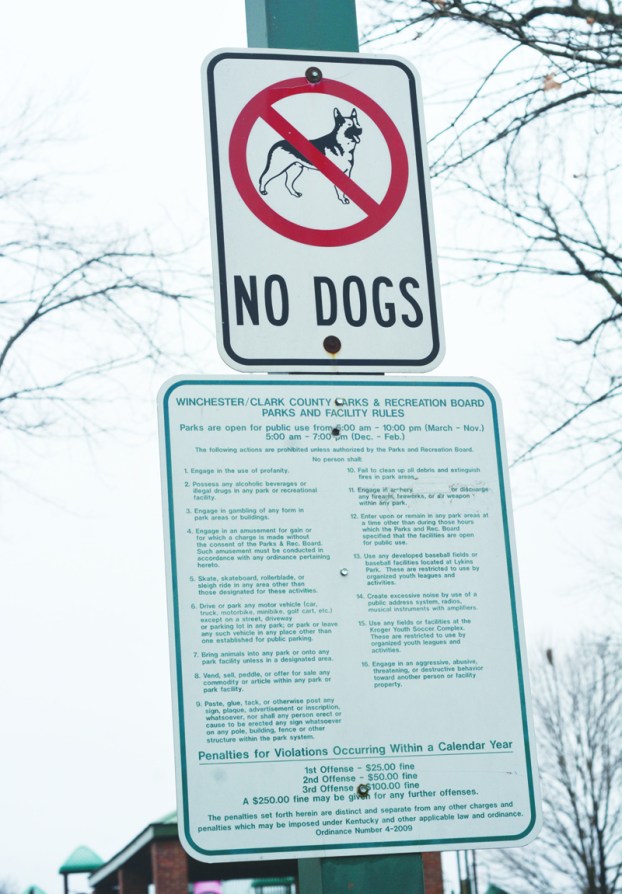 Having dogs in Winchester-Clark County public parks is prohibited by regulation, but Parks and Rec Director Deborah Jackson says people walk their dogs through College Park all the time. The city and county are looking at revising rules regarding prohibited activities.

Visitors to Winchester’s public parks might be able to bring guns or dogs, but not beer or stereos under proposed rule changes being considered by city officials at Winchester Board of Commissioners meeting Tuesday.

City officials read and discussed the proposed revisions of prohibited activities, but made no formal recommendations.

The Clark County Fiscal Court will also go over the rules.

At some point, representatives of the two governments may come together to work out details.

Mayor Ed Burtner said the regulations were on the agenda because county officials wanted to take another look at them.

Rule 1, for example, prohibits profanity, but while cursing may be “a good thing not to do,” Mayor Ed Burtner said, “it would be kind of hard to enforce that.”

Therefore there is a black line through the entire rule.

Aggressive, abusive, threatening or disruptive behavior, however, would not be allowed.

Another that is completely struck through is the one prohibiting skating and skateboarding, rollerblading and sledding in the parks.

Commissioner Jo Ellen Reed reminded the others that College Park’s steep hill above the field has long been heavily used by children for “sleigh rides.”

Under the suggested revision, kids could also skateboard on sidewalks at College Park if the rule is completely removed.

Possession of alcoholic beverages and illegal gambling would remain prohibited, as would creating “excessive noise” by use of a public address system, radio or amplified musical instrument. Concerts, however, have long been allowed at College and Lykins parks.

Vendors would be prohibited except for sanctioned events. That would apply to ice cream trucks at Lykins Park because of safety concerns.

City and county rules currently prohibit bringing animals into any park or park facility except in designated areas, but that regulation is struck from the draft city officials considered Tuesday.

Deborah Jackson, director of programming and marketing, mentioned the next day that people walk their dogs in College Park all the time despite the fact that it’s prohibited, but if the rule is just stricken entirely, no one could require that they be on a leash.

The preliminary draft of the list of revisions says: “The following actions are prohibited in all City/County parks or premises thereof, unless authorized by the Parks and Recreation Board,” but  the “unless authorized” part is struck through.

Commissioner Ramsey Flynn questioned the board not being able to “waive certain items as they do now” for special or sanctioned events.

“This contemplates that these things are prohibited period,” Flynn said.

“Correct. If this is adopted,” Burtner said.

One issue Flynn raised was the rule that says baseball fields at Lykins Park could only be used by “organized youth leagues,” which would seem to bar church groups from using them, even with the board’s permission.

Reed questioned the prohibition against posting signs in the parks. Would that prohibit sponsors’ signs at ballfields?

One issue with the athletic fields, Burtner said, is the baseball fields are maintained by Little League and the soccer fields by the Winchester Youth Soccer League through contractual agreements.

“I have several concerns on this. We mention no alcoholic beverages, no illegal drugs. I don’t see any mention on here of smoking, vaping,” she said.

One rule the city might have to change, Burtner suggested, is one that prohibits the possession of firearms in the parks because, he said, there is a state law that prohibits local governments from having their own gun control laws. Presumably, the city could still forbid discharging those firearms.

Flynn recommended a joint meeting of members of the Board of Commissioners, Fiscal Court, Parks and Recreation Board and city and county attorneys.

Charles Eury of the Parks and Rec Board said it would discuss the proposed changes Monday night.

Burtner suggested that the Fiscal Court would first do what the commission was doing — go over them individually and discuss them.

“I think what we need to do is collect and collate all of these comments and questions and be prepared to address each one of them,” the mayor said.

But Flynn insisted it would be helpful to have “everybody at the same table” at some point.

Also during the meeting Tuesday, resident Joe Barnes raised a concern about the leaking roof at College Park Gym.

“I think we all know firsthand what happens to a building when the roof starts leaking. It doesn’t take long before it affects the structure of the building,” Barnes said.

Eury said the leaking roof has been an ongoing concern, as has water seeping through the south side wall of the building when there’s heavy rainfall.

“We have worked on it on occasion … but it’s an older structure, and it will reappear over time,” he said.