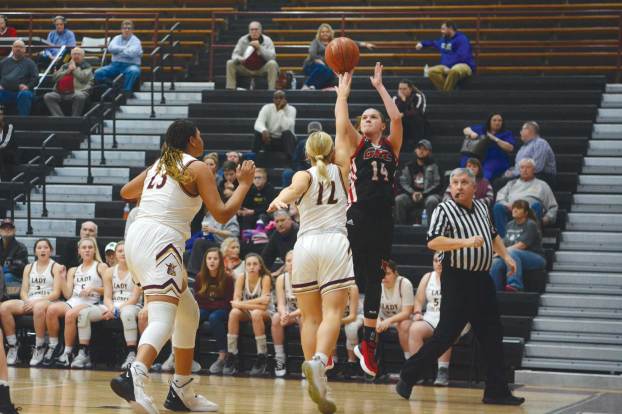 Kennedy Igo has proven to be one of the best shooters in the 10th Region, knocking down 42 triples on 36.2 percent shooting this season for the Lady Cardinals. (Photo by Roman West)

GRC boys, girls look to down Mason County at The Fieldhouse

The George Rogers Clark boys and girls basketball teams will head to Mason County Friday night to play a doubleheader in The Fieldhouse, the former home of the 10th Region Tournament.

The Lady Cardinals will take the court first against the (11-11) Lady Royals.

Since Robbie Graham took over as head coach of the Lady Cardinals, GRC has won six of 10 against Mason County, including three in a row.

The two teams have faced three common opponents, all from the 10th Region.

While neither team has had much success against the common opponents, GRC has played much closer contests and picked up the only win.

The Lady Royals are led by junior forward Emma Taylor. Taylor is averaging 11.2 points per game this year and is second on the team in rebounding, pulling down 4.6 boards per game. Taylor has been efficient from the floor this year, making 50.8 percent of her shots, the third-best percentage in the region. However, unlike most of the generation of basketball players coming up right now, Taylor doesn’t shoot 3-pointers. She is 0-6 on the year from behind the arc.

The Lady Royals as a team have the third-best 3-point percentage in the region, shooting 29.6 percent.

Clark County is not far behind, shooting 29.2 percent from behind the arc.

GRC’s Kennedy Igo is largely the reason behind the team’s 3-point success. As one of the top shooters in the region, Igo has made over half of GRC’s 3-pointers and is shooting 36.2 percent.

The girls game is scheduled for a 6 p.m. tipoff.

GRC’s boys head coach Josh Cook is undefeated against the Royals in his time in Clark County, winning the first two matchups.

The Royals are led by Alex Schalch, a senior big man who is averaging 18 points and 6.9 rebounds per game, both of which are team-highs. Like the Lady Royals’ top player, Schalch doesn’t shoot 3-pointers. He has made one shot from behind the arc this season on seven attempts. Schalch does have a great percentage from the floor despite not shooting threes, making 59.8 percent of his shots.

GRC’s Lincoln Bush will likely be the person called on to contain Schalch. Bush picked up his 500th career rebound in last week’s game against Montgomery County. Bush also reached another rebounding milestone against Bourbon County, picking up 300 on the season, becoming the second player in the state to reach that mark this year.

The Cardinals will follow the girls team, with a scheduled 7:30 p.m. tipoff.

The George Rogers Clark Cardinals football team won their first playoff game in a decade this past fall and the... read more