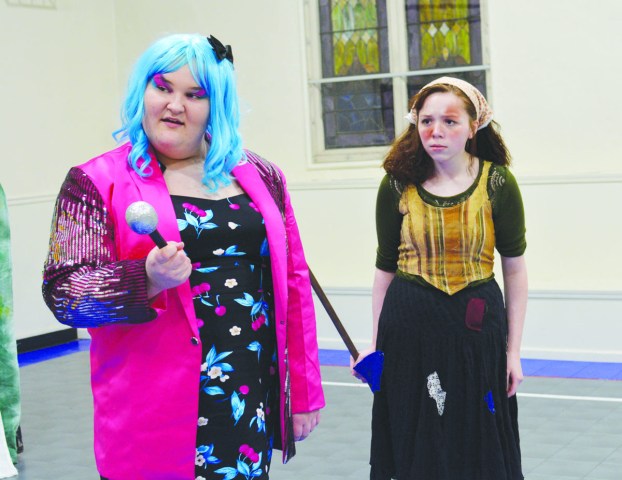 The Prince has the shoe and is ready to wed, but to which young woman does the mystery slipper belong?

Two TV reporters competing for the big scoop interview everyone from the Fairy Godmother in need of a day planner, who can’t tell the puppet Pinocchio from Jack and his cow, to mice in the witness protection program, but can they help the Prince find his beloved?

“Cinderella Confidential” is a media-age retelling of the timeless fairytale.

“It’s the story behind the story that everyone knows,” Kelly Estes, director of the Winchester Players, said Tuesday night during a dress rehearsal at First Baptist Church on Main Street.

The young actors, having performed the play at Madison Middle School Monday, were preparing for presentations at Strode Station Elementary Thursday for students and public performances at the Clark County Preschool Saturday at 7:30 p.m. and Sunday at 2:30 p.m. Tickets are available at the door.

“Cinderella Confidential,” written by Eric Coble, is this year’s touring show for the Players.

“Middle school can be a hard age. It’s not cool to like anything. But we had a really good audience” in Richmond, Estes said. “In this show, there are several times that the actors interact with the audience, and they were very good about responding and giving their feedback when the actors asked questions. We had a great time there.”

Estes said she was looking forward to presenting the play to younger children at Strode Station Elementary and the preschool.

“I love to see the looks on their faces,” she said. “I have fun watching the little kids experience theater, sometimes for the first time.”

The actors are looking forward to performing for the children.

“Cinderella has been done so many times in so many ways, but this story still feels like a new take on it,” said Chandler Murray, who plays the Prince.

Charli O’Dell, who plays one of the reporters, said the play provides an opportunity to introduce children to theater.

“We don’t know if these kids will ever see a production in their life, so it’s really cool to like give that to them and let them experience the art through us,” she said.

Natalie Shoemaker, who plays the other reporter, said being in the cast feels like being part of a family.

“On stage, we may have to be mean to each other, but backstage, we’re friends, and we have such a good chemistry on and off the stage,” she said.

“It has completely changed all our lives,” Charli said. “I don’t know where I would be without this company and without theater here.”

Estes and her brother, James, started the Winchester Players in 2015. Both write, she directs, and he handles the technical side of the production.

Last year’s touring show, which is generally for younger audiences, was “James and the Giant Peach.”

In the summer, they also do a musical for adults and a musical revue for children and teenagers.

Clark County is keeping its dead farm animal removal program, but the cost to the county is going up significantly.... read more