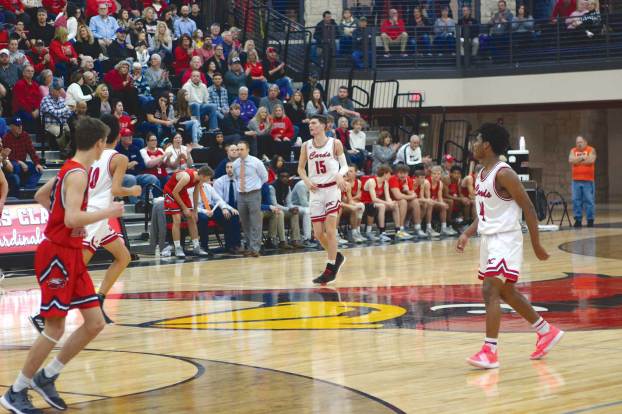 Jared Wellman put on a show in the opening of the GRC Arena Tuesday night. Wellman scored 18 points on 6-of-9 shooting to help lift the Cardinals to a win. (Photo by Roman West)

ATHLETE OF THE WEEK: Jared Wellman

Jared Wellman is a junior forward for the George Rogers Clark boys basketball team. Wellman can get it done from anywhere on the floor, but his long-range shooting helped break in the new GRC Arena with a win. Wellman shot 5-of-8 from behind the arc in the Cardinals’ double-overtime win against Madison Southern Tuesday night.

WELLMAN: To me it’s all about the rush of going out there and getting to do what I love in front of my friends and family. The bond I make with my teams is very important to me also.

Q: Do you have any athletes you try to model your game after?

W: Yeah for sure. A big part of my game is shooting so I watch some of the best like JJ Redick, Steph Curry and a few others.

Q: What team goals did you set before the season?

W: You know there’s a lot that we talk about and the biggest one is always Rupp. Winning district, then region, then on to Rupp. That’s what we want and I think we’ve got a good shot.

Q: Did you set any personal goals before the season?

W: This year I’m a leader and I wasn’t used to that so I had to work really hard on being a better teammate and always picking my guys up. I also wanted to evolve my game by doing things other than shooting so I’ve been working on that too.

W: Probably last season when we beat Bourbon County in double overtime to win the district championship. The atmosphere, length and grit in that game was so fun and rewarding.

Q: Who has had the most influence on your basketball career?

W: I would say my dad. He was the one who introduced me to the game, drove me to practices and games, stayed with me late in the gym and supports me so much. I’m very thankful for all he’s done.

The new home to George Rogers Clark football will be the home of this year’s Lexington-area Kentucky Future Stars tryouts.... read more