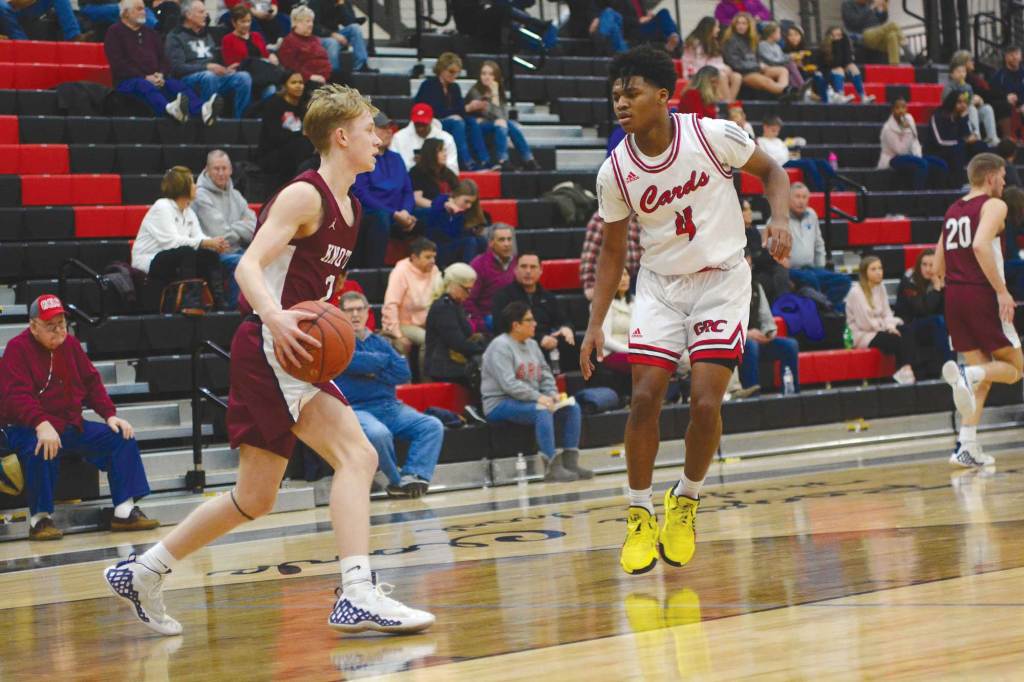 KJ Rucker applies the full-court pressure to Knott County Central’s Kent Damron. Rucker finished with 15 points, nine of which came in the fourth quarter, to lift GRC to a 70-50 win over Knott County. (Photo by Roman West)

The Cardinals were led by Jerone Morton, who finished the game with 20 points. Morton scored nine consecutive points during a 15-2 Cardinals’ run in the third quarter that would put the Patriots away.

While the Cardinals had a lot of fun in the second half, which is something that head coach Josh Cook wanted to see out of his team, the first half was not as fun.

GRC struggled to make shots around the rim, allowing Knott County to jump out to a 12-6 with three minutes to play in the first quarter.

The Cardinals went on a 9-0 run to close the quarter to take a lead going into the second quarter. Morton was a key player in this run as well, scoring seven of the nine points.

Clark County struggled in the second quarter, only scoring eight points and missing nearly as many free throws as they made.

Knott County’s point guard Kent Damron, who Cook called one of the smartest players his team has played against this year, helped lead the Patriots on a 10-3 run to close out the half and take a 26-23 lead into halftime.

The 15-2 run in the third quarter came nearly as soon as the teams hit the floor coming out of the locker rooms. However, the Patriots closed the quarter by scoring the final four points, bringing the Cards’ lead back to single digits.

Another offensive explosion from the Cardinals in the fourth quarter put the game away for good.

GRC scored 26 points in the final period, including nine from KJ Rucker, on their way to a 70-50 win.

Not only was the Cards’ offense explosive, but it was also efficient. GRC committed only one turnover in the second half.

The victory brings the Cardinals’ win total to 20 on the season. They became the third team in the region to hit that mark this season.

The Cardinals will be back in action today at 4 p.m. as they celebrate senior night against 10th Region opponent Bracken County.