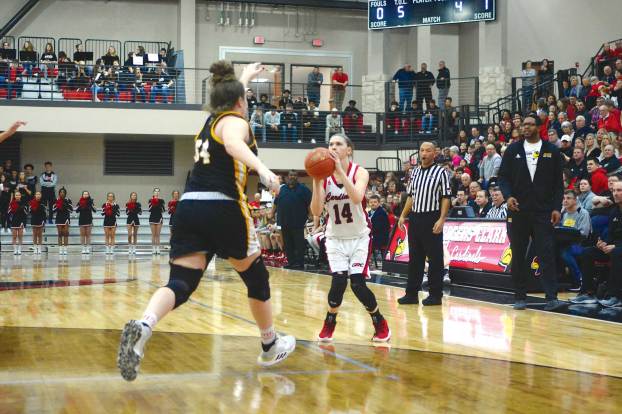 Kennedy Igo has been one of the top shooters in the region this year, knocking down 47 triples on 37.6 percent shooting. (Photo by Roman West)

The Kentucky Association of Basketball Coaches selected Igo as the 10th Region Player of the Year Friday morning.

Along with winning the award for the region’s best player, Igo will go on to become a finalist for the state’s Miss Basketball award.

Her next stop in her basketball career will be Northern Kentucky University, the school she signed her letter of intent to attend in November.

Before she gets there, Igo has unfinished business to attend to as a Cardinal. Igo and the Lady Cardinals have completed the first of their team’s goals for the season, locking up the top seed in the district tournament. They also want to win the district, win the region and make a run in Rupp Arena.

One of Igo’s personal goals heading into the season was to reach 2,500 career points. Heading into Friday night’s game against Rowan County, Igo sat at 2,351 points.

Igo is the first Clark County player or coach to be recognized as the best in the region since the 2018 season when Will Philpot won the Player of the Year award for the boys team.

The 10th Region Coaches Association has finalized their All-Region teams and four Cardinals found their way on the list. Lincoln... read more