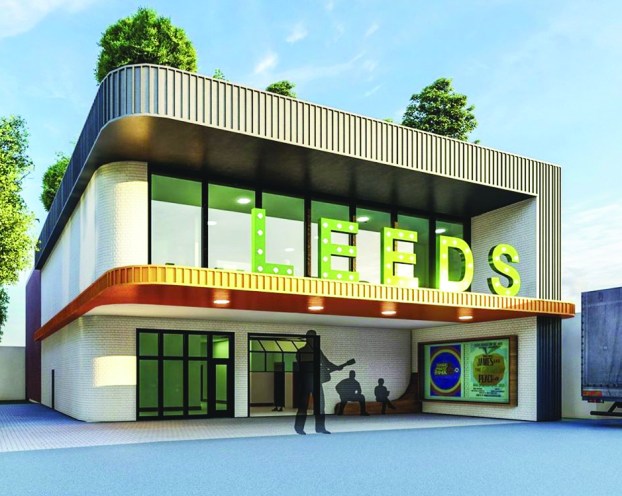 An artist’s rendering from NOMI shows proposed changes to the rear entrance of Leeds Center for the arts that faces Church Alley. (Image submitted)

Leeds Center for the Arts is growing and needs room to expand.

On its Facebook page Monday, the performing arts center announced its plans for a $2.5 million capital campaign to enlarge the backstage area of the 95-year-old former cinema on Main Street to include dressing rooms and restrooms, a rear entrance on Church Alley, a basement area for set construction and storage, and a second floor that can be used for additional classroom space, a dance studio and a black box theater.

“Leeds has become a catalyst for positive change and growth for downtown and our community. It now houses a thriving arts scene and our educational programming serves over 1,000 children every year. Moving toward the future, we have a vision for a venue that can house even bigger shows, children’s classes and musical guests. We can make the most of this opportunity by making the space more efficient, secure and usable,” the Facebook post says.

There will be a freight elevator, and the basement will include a small kitchen for catered events.

The arts center has released an architect’s rendering showing what the rear of the building will look like, as well as a floor plan.

The front of the building and its iconic marquee will be unchanged, and so will the stage, which can be viewed from a balcony as well as the main seating area.

The theater seats about 1,200 people.

Tracey Miller, executive director of the nonprofit arts center, said attendance for the theater has “grown exponentially” over the last several years. It now brings in about 10,000 visitors a year for about 35 to 40 events, including children’s plays, musicals, concerts and lectures. About half of its guests come from outside Clark County and Kentucky.

But it’s also an educational institution.

“The most important thing we’re doing is empowering youth in the arts,” she said.

Leeds began as a movie house in 1925, and continued as a single-screen cinema until it closed in 1986. The Winchester Council for the Arts restored it to its original look and reopened it in 1990 as a center for performing arts. It now houses a thriving arts scene and provides opportunities for about 1,000 children annually.

Miller said that although interest in Leeds is growing, it is still something of a leap of faith to launch the capital campaign, but she is hoping the community will respond enthusiastically to the call to take the theater to its next stage.

More information about the capital campaign is available at leedscenter.org/capitalcampaign.