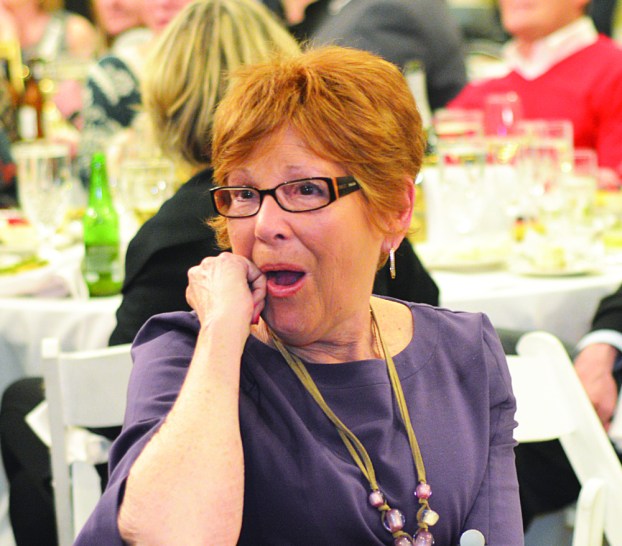 Vanessa Rogers reacts with surprise to learn that the Leeds Center for the Arts has established a scholarship in her honor. (Photo by Randy Patrick)

Vanessa Rogers’ eyes glistened and her smile glimmered when she learned she was the surprise guest of honor at Leeds Center for the Arts’ sixth annual Puttin’ on the Glitz benefit at the Winchester Opera House.

Steve Crosby, music director for the performing arts center, announced during the formal dinner a new scholarship established in honor of Rogers, a high school drama teacher for more than 20 years who directed many plays for Leeds. Each year, $500 will be awarded to each of two high school students who major in the arts in college.

One of Rogers’ former students, Hollywood actor Matt Long, made a big screen appearance at the dinner via video.

“Outside my parents, you were the most influential person in my young life,” Long said.

He said Rogers helped him excel in college and succeed as an actor, and he was grateful.

“You believed in me … and that helped me to believe in myself and gave me confidence. You made me feel special and important, and that means so much to a kid. … I don’t know what I would have done if it wasn’t for you. I love you. You’ll always mean so much to me,” he said.

Crosby, who was introduced to his wife Shanda by Rogers and named their youngest daughter, Vanessa Kaeton, for her, also spoke glowingly of Rogers, whom he met when he was a senior at Georgetown College and she was directing Rodgers and Hammerstein’s musical “Oklahoma!”

Kaeton, assistant executive director, who organized the gala with Executive Director Tracey Miller, also spoke at the event, and Rogers rose briefly to express her appreciation for the tribute.

“She had no idea” that she was going to be honored, Crosby said.

Puttin’ on the Glitz is the biggest fundraiser each year for Leeds Center for the Arts, a vintage movie theater that has been repurposed as a performing arts center and has launched a capital campaign for a proposed expansion.

During dinner, Leeds actors performed selections from several shows. The opening was “No Business Like Show Business” from “Annie Get Your Gun,” the female company performed “Big Spender” from “Sweet Charity,” and young Wyatt Jackson and David Lynn charmed the audience with “BFF” from “Sponge Bob the Musical.” Other performances included tunes from “Hamilton,” “Grease,” “Wicked,” “Big River,” “Funny Girl,” “Addams Family” and “Les Miserables.”

There were live and silent auctions to raise money for the theater, and the plays for the upcoming season were revealed to the audience. They will be “Little Mermaid,” “Seussical” and “Music Man.”

“This is the most amazing thing in Winchester,” David Rogers, Vanessa’s husband, said of the gala.

Miller said it isn’t known yet how much money was raised from tickets, sponsorships and auctions, but the gala usually brings in $7,000 to $10,000.

Leeds Center for the Arts is growing and needs room to expand. On its Facebook page Monday, the performing arts... read more