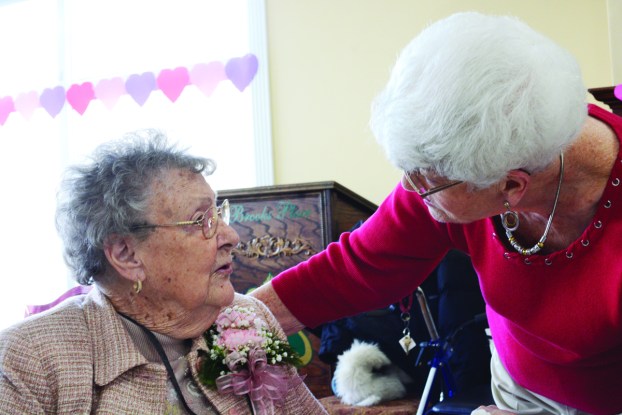 Polly Todd, left, talks with her niece, Janice Taulbee, at her 100th birhday party Saturday at Rose Mary C. Brooks Place, where she is a resident. (Photo by Randy Patrick)

The Rose Mary C. Brooks Place resident leads an active social life for a centenarian and has a better memory than many people decades younger.

“It’s wonderful!” she said Saturday, describing the birthday party attended by a large number of family members and friends in the dining hall. “This is the second one they have had” for her, she said. The first was smaller, for folks at the retirement home.

She actually reached her century mark on Feb. 12, but was having the big party a couple of days later.

She seemed perfectly at ease among the crowd as she sat at her table with a framed photograph of she and her husband, as guests greeted her and then enjoyed cake, hors d’ouevres and refreshments.

“She attends every event they have here and participates in everything they do,” her son Randy Todd said.

Asked what she attributes her longevity to, she gave a two-syllable answer.

She and her husband Seagle lived on a farm on Agawam Road until 1977, when they moved to town, first to Bon Haven and then to one of the cottages at Brooks Place. After Seagle died, she moved into the “Big House,” as residents call the apartment building.

Before she retired, she worked for Farm Bureau for many years.

She has two sons and daughters-in-law, Randy and Lisa, and Larry and Pat, several grandchildren and, she added proudly, one great-great grandchild.

Among those who came to the party Saturday was Bill Berryman.

“Polly and my mother were real good friends,” he said. “She was in my house when I was growing up. She and my mother were always together, and when Polly’s husband Seagle would go to Mount Sterling or somewhere and take a load of cattle, they’d come by and get Mother, and she’d go with them.”

“Polly’s got a good memory,” he added. “She can tell you more about it than I can.”

Connie and Dan King said they take her out to eat about twice a month.

“She loves to go to Cracker Barrel,” they said.

Janice Taulbee described her Aunt Polly as “good and caring and concerned” and pretty sharp.

“She’s just precious!” musician Mary Anne Crane said. “I play here for an hour on Mondays, and that’s how I got to know her.”

She likes to sing along, she said.

“She’s like the Eveready Bunny,” her son Randy said. “She just keeps going.”

The Clark County murder trial for Lonnie Martin has been postponed again, but attorneys in the case said they are... read more