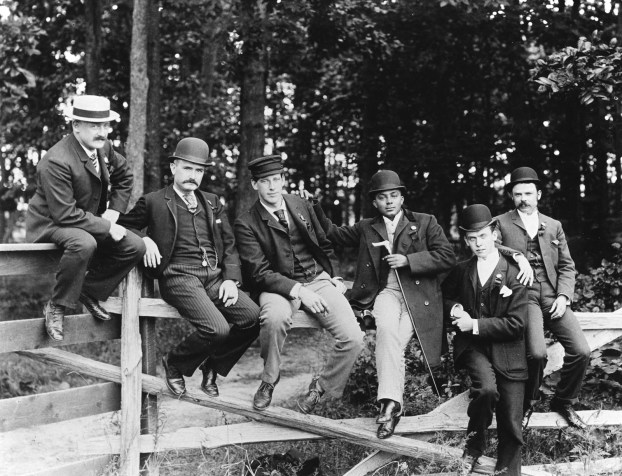 Isaac Murphy, fourth from left, celebrates his victory on Salvator at a clambake at the home of trainer Matt Byrnes in New Jersey. (Photo submitted)

Black History: Legendary jockey may have been Clark native

Kentucky is known the world over for thoroughbred horse racing, but part of its heritage that’s not well known is that the sport of kings was once dominated by the sons of slaves.

“Most of the jockeys were black,” Foster Ockerman Jr., a lawyer and author of “Hidden History of Horse Racing in Kentucky,” said about 19th century riders.

Isaac Murphy, who won nearly half of all his races, including three Kentucky Derbies, may have been a native of Clark County, but because “black genealogy is tough,” Ockerman said, no one knows for certain. Birth records are scarce for African Americans of that era, especially after the Emancipation Proclamation. Plantation owners kept better records on their horses than they did on their former slaves.

Most biographies of Murphy agree that he was born in 1861, just before the start of the Civil War, on David Tanner’s Pleasant Green or Pleasant Green Hill farm, but some place the farm near Winchester and others near Lexington or Frankfort.

Although the accounts agree that his mother was America Murphy, who was a slave, others have his father as being either Jerry Skillman or Skillman Burns, a slave, or James Burns, a freeman.

It’s possible he was both at different times, because multiple accounts describe Burns as a private in the Union Army who was at Camp Nelson in Jessamine County. Many blacks enlisted in order to gain their freedom.

In his book, “Prince of Jockeys: The Life of Isaac Burns Murphy,” Pellom McDaniels III wrote birth records show a nameless black child was born Jan. 6, 1861 to a nameless black slave woman who lived on Tanner’s farm, and that it was the only birth listed on the farm in 1860-1861.

What is known about Murphy is that he remains one of the winningest jockeys of all time.

By his own account, Murphy won 628 of his 1,412 races, an amazing 44 percent of all his starts, although statisticians’ records confirm 539 of 1,538 races, which would make his winning rate 34.5 percent. It’s possible some of his races weren’t covered in the chart books.

“I don’t think that has ever been surpassed,” said Ockerman, whose book published in 2019 includes a chapter on Murphy and other black jockeys.

The Isaac Murphy Award is given each year by the National Turf Writers Association to the thoroughbred jockey with the highest winning percentage for the year.

According to the “Kentucky African-American Encyclopedia,” he also won four American and five Latonia derbies as well as victories in the Clark Handicap and the Kentucky Oaks.

“There’s no one who could equal Isaac Murphy’s record as a jockey,” Howard said.

Murphy was the first black jockey ever inducted into the National Museum of Racing’s Hall of Fame in Saratoga, N.Y., in 1955.

Ockerman describes black jockeys as “truly the first American athlete class,” and said they were part of an important continuum in the sport. Young boys would start working in the racing industry by exercising horses, then become jockeys, then quit riding when they gained weight and start training horses, he said.

That seems to be the course Murphy pursued. After winning his last Kentucky Derby, Murphy rode less and trained more, but he was never as good a trainer as he was a rider.

He was quite well-to-do for his day.

It wasn’t unusual for black jockeys in the 19th century like Murphy to earn tens of thousands of dollars, which would have been comparable to a National Basketball Association players’ income today, Ockerman said.

According to the Kentucky African-American Encyclopedia, Murphy married Lucy Carr on Jan. 24, 1883 at St. John’s African Methodist Church in Frankfort, and The Kentucky Leader reported “Murphy’s comfortable home on East Third Street was gaily lighted and decorated for the occasion.”

The bride served as the hostess and was “dressed in white silk, trimmed with pearls and white lace, and wore ornaments of diamonds and gold.”

Ockerman said that from an observatory on the Murphys’ three-story mansion in Lexington, the jockey could watch the races on the Kentucky Association track on Seventh Street.

Today, there is a historical marker and park that show the place where Murphy’s house stood, where Third Street becomes Winchester Road near Midland.

For years there was an exhibit on Murphy in the Lexington History Museum in the old Fayette County Courthouse, but the museum’s collections have since been placed in other locations. The Murphy exhibit was produced by Yvonne Giles a prominent Lexington African-American historian.

Murphy’s resting place, which was in a neglected cemetery in Lexington, is now at the Kentucky Horse Park, and there are Murphy exhibits as well at the Keeneland Race Course and Churchill Downs’ Kentucky Derby Museum.

He is “the greatest jockey ever, in the thoughts of many,” and his story is “a lost part of history,” he said.

“Clark County should raise the money to erect a historical marker for him,” somewhere in the downtown area, near the courthouse, the senator said.

Toni Clayton and her brothers grew up in Montgomery County going to emergencies with their father, a long-time firefighter. “I... read more