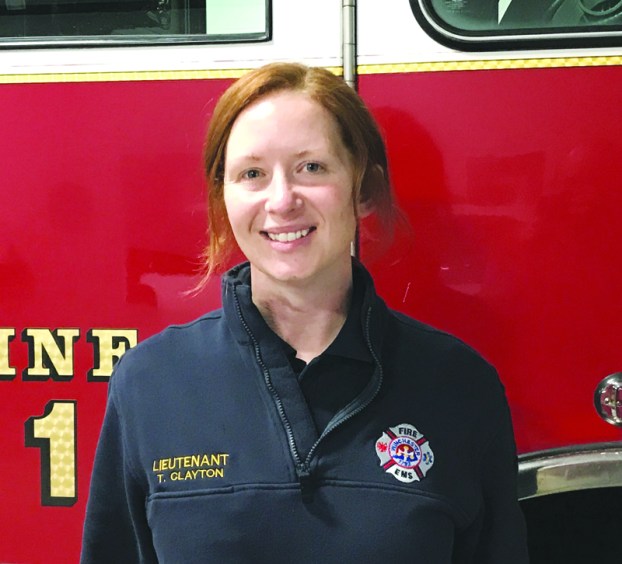 Toni Clayton and her brothers grew up in Montgomery County going to emergencies with their father, a long-time firefighter.

“I grew up going to the scenes with my dad,” said Clayton, a lieutenant at Winchester Fire-EMS. “If we were with him, we got to go with him when he got a call.”

They watched from the car while the firefighters responded to traffic accidents or burning buildings.

“We would sit on the scene in the middle of the night,” she said. “We’d just be hanging out in the car.”

Like her father Tony, she started hanging around the fire station and officially started volunteering when she was 20. Her older brother Patrick is a captain with the Frankfort Fire Department.

“My whole family has been medical or public service and tons of military (experience),” she said. “We weren’t allowed to be lawyers or doctors.”

Initially, Clayton said she thought she would focus more on the emergency medicine side of the fire service. Once she got into the training, she realized she enjoyed the fire side much more.

“The thing I like is fighting fire,” she said. “I knew I was really capable of it. It’s been second nature to do this kind of stuff.”

Clayton has worked for Winchester Fire-EMS for more than 14 years and presently holds the rank of lieutenant.

The job, she said, is rarely as heroic as it seems on television or in movies. There are times, though, when everything they train for gets put to the test.

At the top of her list was a fire at B&P Apartments on Springmist Lane in March 2016. One of three buildings on the site had caught fire, which blocked both sets of stairs to the upper floor. Several people jumped out of windows to escape. Three people died from the blaze.

Jackie Hisle is presently serving a 10-year prison sentence for second-degree manslaughter from the blaze, which police believe started while Hisle was smoking while using oxygen in his first-floor apartment.

Everyone one the truck, she said, was not expecting the fire to be as big as it was.

“You wouldn’t think it would get that big that fast,” she said. “We thrive under those conditions. That’s when it kicks into overdrive and it comes together.”

Training and teaching was one of her father’s passions, she said. Clayton worked as an instructor with the Kentucky State Fire Rescue Training for about nine years.

“That;s how volunteer (firefighters) get a lot of their training,” she said. “He loved training and teaching. For me, it was a way to get more experience from those with more experience. There’s several (Winchester firefighters) that trained with my dad. When these guys came around to train, he took them under his wing.”

Those relationships, she said, is a big part of why she has stayed with the fire service.

“The part of the job that keeps people around is inside the walls of the station and the peiple you work with,” she said. “You’re doing something every day. We’ll go out and have dinners or throw baby showers for the guys. That’s what I grew up with.”

If you like to swim, bike and run, Winchester-Clark County Parks and Recreation has a challenge for you. The Lazy... read more