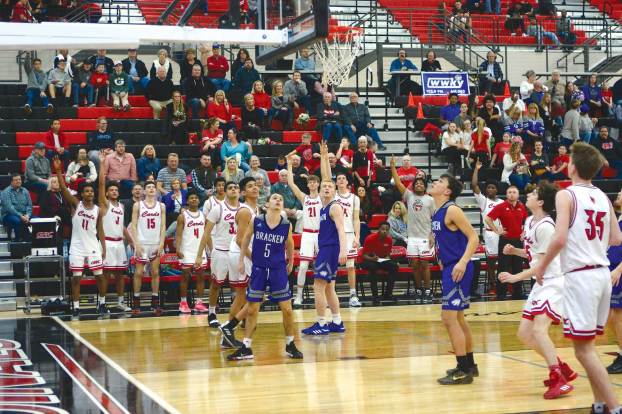 The Clark County Cardinals all stand up in excitement as they watch teammate Armaan Manak take a 3-point shot late in the game against Bracken County Saturday afternoon. (Photo by Roman West)

GRC’s girls team enters its regular-season finale as winners of four of its last five and has scored 63 points or more in each of the five games.

Head coach Robbie Graham is 3-1 against the Blue Devils in his time at GRC. All three wins have been in the past three seasons.

Tyra Flowers had a huge game for the Lady Cardinals in last season’s matchup with Henry Clay. Flowers scored 14 points and pulled down 19 rebounds in the Cardinals’ 63-52 win.

Sophomore Lauren Thomas has been a key player for Henry Clay, scoring 7.6 points per game while bringing down 9.9 rebounds per game.

Flowers will likely be in charge of slowing Thomas down. Flowers has picked up double-digit rebounds in two of GRC’s last three games.

Josh Cook is 1-1 against Bryan Station in his tenure at GRC. The two teams split the two meetings last season. The Cardinals won the first meeting 75-63 in a tournament at Lexington Catholic. The Defenders were able to steal a 74-64 win two weeks later on Clark County’s home floor.

Bryan Station is led by senior James Lindsay. Lindsay is averaging a team-high 16.2 points per game this season on 51.6 percent shooting. Lindsay has had a good season from behind the arc, knocking down 20 of his 50 3-point attempts. Lindsay is also averaging 4.6 rebounds per game, the second-most on the team.

Jared Wellman was big for the Cardinals in both games against the Defenders last season. Wellman scored 10 points on 4-of-6 shooting in the Cards’ win and 14 points in the home loss.

Jerone Morton is another player that could explode for the Cardinals. Morton has led GRC in scoring in four of the last five games and is averaging a team-best 16.9 points per game.

The Lady Cards are at home for their final regular-season game. They will tip-off at 7:30 p.m. in the new GRC Arena. The boys are on the road and are also scheduled for a 7:30 p.m. tip.